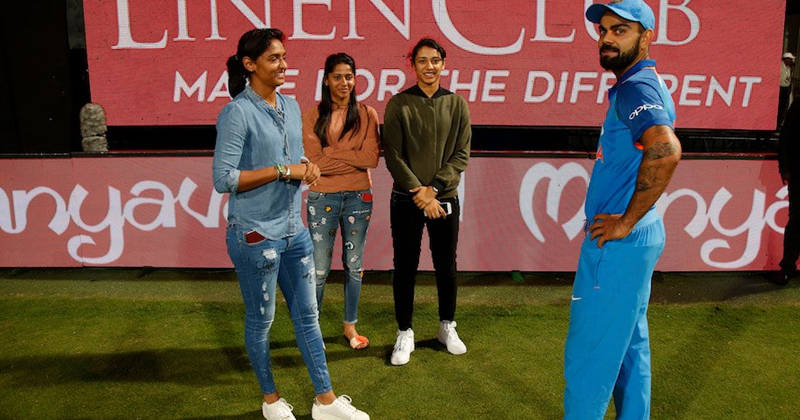 Harmanpreet Kaur and Smriti Mandhana need no introduction as they led India to the Women’s World Cup final this year.

WWC17 was not only a tournament but also an opportunity to prove their mettle as well as to show the world that they are no less than Men’s cricket team players, and they lived upto the expectations.

Now the whole Nation has bowed down to these women as they are getting all the deserving appreciations which they should have got a few years back, in the first place. Moreover, Mithali Raj was recently named in BBC’s 100 most influential women list of 2017 and owing to the fact that she is the leading run-getter in ODIs, one might argue that she deserves more than this.

Indian Men’s Cricket team lost the last match by 21 runs but fans had a particular reason to fire up the M. Chinnaswamy Stadium when Harmanpreet Kaur and Smriti Mandhana were seen in the same frame with Virat Kohli.

Here are the pictures of Harmanpreet Kaur, Smriti Mandhana with Virat Kohli:

I am a Big fan of Indian women cricket team’s, especially of Smriti Mandhana’s and as for the India vs Australia 4th ODI, it was an entertaining clash, to say the least.

Despite Virat Kohli & Co. making several blunders, it was still an entertaining match to witness. Win or Lose, this is a part of the game and we hope that India makes a strong comeback in the last match of the ODI leg.