Home Travel The 10 Most Dangerous Roads In The World 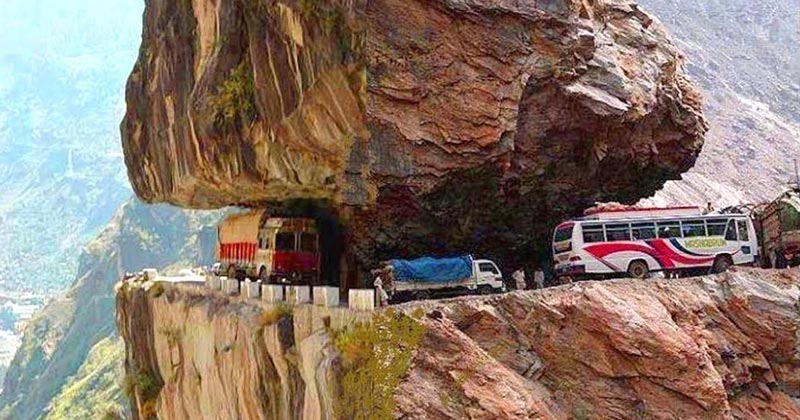 The 10 most dangerous roads in the world are full of gravel, ice, unsecured cliffs and sharp bends. If there is an avalanche or a landslide, these roads become an absolute nightmare or a test of courage and madness.

Here is a list of The 10 most dangerous roads in the world that you may choose to travel or avoid.

1. The Yungas Road in Bolivia

The mountain road built by inmates in the 1930s is unpaved and has no guardrails. Due to the warm and humid climate, there are often low visibility and a soggy road surface.

With erosion, rockfall is also expected. Due to its dangerousness, it also bears the epithet Road of Death. Downhill riders are magically attracted to it.

2. The Manali-Leh Highway in India

The 477-kilometre-long traffic route in India is for the most part only one-lane. It leads the world’s highest passable mountain passes. Snow masses and landslides threaten the road, which is regularly repaired by the Indian army.

On the Manali-Leh Highway, which is only open from June to mid-September, motorists can often not drive faster than 20 kilometres per hour.

3. The Srinagar-Leh Highway in India

On this over 400 kilometres long and narrow track with extreme climbs, there are huge snowdrifts and snow depths of more than 17 meters.

Therefore, the highway should only be used from June to November. Also, rockfall can be expected during the journey.

This is one of the 10 most dangerous roads in the world, one of the oldest and most important highways in South Asia. The Grand Trunk Road is about 2,500 kilometres long and connects India, Pakistan and Bangladesh. There is a lot of traffic on this road.

Also, wild and domesticated animals, ox carts and pedestrians are here on the way, which leads to congestion and increased risk of accidents. India observes the most traffic fatalities worldwide, especially on the Trunk Road.

Suggested Read: Best Places to Visit In The Scotland of India

5. The Guoliang Tunnel in China

The history of the Guoliang tunnel is remarkable. Since only a challenging footpath connected the village of Guoliang, which is located at the top of the Taihang Shan Mountains, with the outside world, and the government did not want to build a road in China, in 1972 thirteen strong villagers joined forces to make one of the city’s 10 most dangerous roads with hammers and chisels To build the world.

This narrow highway between China and Pakistan is the world’s highest paved highway. It leads past deep cliffs and erosion-threatened, steep mountain slopes. A huge landslide in 2010 created a lake that flooded 22 kilometres of track and can only be accessed by boat.

7. The Tibbitt to Contwoyto Winter Road in Canada

The world’s longest ice road can only be used for about 60 days a year, as 87% of the way passes through frozen lakes. The 568-kilometre route is mainly driven by trucks that are in convoy for safety purposes, driving no more than 25 kilometres per hour and maintaining a distance of about 500 meters to spread the weight over more area.

Between mid-May and October, this tourist attraction is released with eleven hairpin bends. The road is very narrow and oncoming vehicles are a challenge when over 2,000 vehicles frolic on the track.

On the gravel road with 13 hairpin bends, boulders, mud holes and constantly threatened by landslides, only a few have the skill and the heart to drive down Carretera Hiram-Bingham road in Peru. There is a chain requirement for vehicles but only a few sticks to it.

The 40-kilometre gravel road is paved with huge potholes. Some steep slopes are not protected by crash barriers. A 4×4 vehicle is recommended.