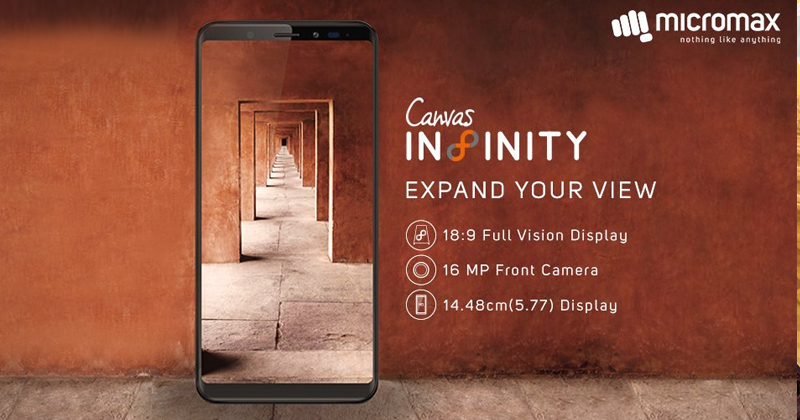 Micromax Canvas Infinity with a 5.7-inch display having 18:9 aspect ratio has been launched in India by the home grown maker with a price tag of Rs 9,999, which interestingly, is same as that of the recently launched Evok Dual Note, which has brought dual-camera setup in the sub-Rs 10,000 segment.

From what we have seen so far, the Indian smartphone manufacturer wants to market both its recent launches in two different categories and while the Evok Dual Note is one of the best dual-camera offerings in the segment, Micromax Canvas Infinity brings you the Infinity Display experience (ala Samsung Galaxy S8) as well the best front camera.

However, while we were not satisfied with the MediaTek processor in the Evok Dual Note, the company has taken the game to a whole new level with the Micromax Canvas Infinity by launching it with a Snapdragon Chipset. What’s even more different about the Micromax Canvas Infinity is the fact that it puts a massive 5.7-inch screen inside a compact body, offering the 18:9 aspect ratio.

While the company looks confident of a comeback with the Micromax Canvas Infinity, the competition has already gotten stiffer with the launch of the LG Q6 (which also has 18:9 aspect ratio) that comes with almost similar design aesthetics as well as the features of the G6 at a lower price.

So, will Micromax Canvas Infinity put a dent in a segment which Chinese smartphones have been ruling for more than a couple of quarter? Let’s see!!

What We Liked About The Micromax Canvas Infinity

One should not expect Micromax Canvas Infinity to performance anything like Xiaomi Redmi Note 4 or a Lenovo mid-budget offering, despite having better on-paper specs, however, Infinity display is where it stands tall and it is going to be hard for other competitors to match that.

Yes, there is the LG Q6 which offers better Infinity experience but comes with a higher price tag, as well.

In short, Micromax Canvas Infinity is a revolution in its own and the Indian maker has finally found a way to regain its position in the market.

Should you buy one?

It’s a definitive yes, if you are looking for the ultimate multimedia smartphone under Rs 10,000 and if you end up buying one, there is no reason you will regret your decision as the Micromax Canvas Infinity has enough under the hood power to satisfy your inner performance enthusiasts to some extent, as well.