Mercedes were denied the pole in the past two runs at Monza, home to the Italian Grand Prix, including 2019 and 2018 editions. In 2018, Kimi Raikkonen, then with Ferrari, stormed to pole position, then his first, since Monaco 2017, as the Finn set a rip-roaring 1:19:119 at the Ferrari heartland. While in 2019, it was Ferrari newcomer Charles Leclerc who not only bagged pole position but also raced away to a dominant win.

On both occasions, Mercedes’ Lewis Hamilton and Valtteri Bottas had to play catch-up, despite being armed with exceedingly powerful machines.

The W11, though, is in a different league altogether.

But, in 2020, it doesn’t look as if Mercedes will have any problems whatsoever, whether in qualifying or in the main-race battle.

For so downright dominant has been the pace of the two Black Arrows, who are not only nailing down nearly all qualifying run this season but winning Grands Prix, weekend after weekend.

Of the seven races held thus far, Mercedes have won six, with Red Bull being the only other victor at the 70th Anniversary Grand Prix, thanks to Max Verstappen’s hot run.

Much of Mercedes’ blistering form has been down to the outright pace of the car and the unmatched levels of consistency shown by the great Lewis Hamilton, now eyeing a 90th F1 win, should that happen at Monza.

But was that all? Another factor, which according to many, led to a nearly faultless Mercedes assault on the rest of the grid, was down to the “Party engine mode,” a particular condition of the car’s engine that allows extra power to come into play.

Though, of late, a lot was said in regards to the current grid throwing up many surprises in the wake of the FIA bringing forth the engine mode restrictions, in a bid to introduce a level-playing field.

Additionally, Lewis Hamilton also echoed a slightly disgruntled voice stating his dissonance with the new FIA restriction but also serving a reminder that the new ruling would not hamper Mercedes as such.

Guess what? Having said that, where Friday’s Free Practice results stood then it can be said with great certainty, that the six-time world champion wasn’t bluffing.

After all, as expected or should one say, feared (given how domineering have Mercedes been all throughout in 2020), it was yet another Mercedes 1-2 on Friday.

A few hours later, the leading question now for the 2020 Italian Grand Prix is whether that will be the scenario for the qualifying battle later on Saturday?

Truth be told, it doesn’t look as if any particular team can emerge as a thorn in the path of the dominant Mercedes pace.

But a noted F1 publication also noted as to how the new restriction could still play into the hands of the leading team among the ten fighters on the grid.

How much mechanical stress is relieved by the absence of ‘party mode’ settings is out of all proportion to the 20s or so per weekend of its allocated use. That saved stress can now be redeployed over the whole weekend.

If the Mercedes previously had the most potent ‘party mode’, it was because of greater inbuilt resistance to that stress. That will simply now be expressed in a different way. Everyone will have been running conservative modes on Friday – as usual.

Also Read: Not A Disaster For Kimi In Monza Qualifying, But The Iceman Still Searching For That Elusive 2020 Point

But the mode restriction only applies from the beginning of qualifying to the end of the race. So what was being used today will still have been a more conservative setting than will be used tomorrow. The chosen qualifying/race mode will not be uniformly the same at each track.

All of that being told, we are only a few hours away from the start of Quali- another period where one could evidence the dominant discourse of the 2020 championship: “Hammertime!” 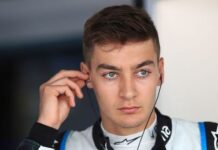