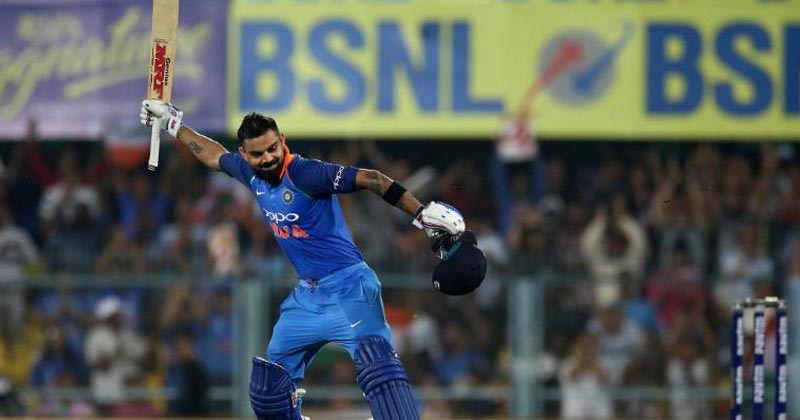 To say that Virat Kohli is a batting great would be understatement. A cursory glance at the lengthy list of Virat Kohli records would tell us why this man is so special. In a very short span of time, the Indian star batsman has already achieved some phenomenal feats that will stand the test of time.

As Team India readies for another lengthy home season starting with the India v South Africa series, one can be certain that there will be several more Virat Kohli records made by the end of it. Before that, however, let us have a look at some of the key accomplishments of India’s batting genius.

Second-highest run-getter for India in ODIs:

It’s rather hard to believe but Virat Kohli is already the second-highest run-getter for India in ODI cricket. At the time of writing, Kohli had played 239 ODIs and collected 11,520 runs in them at a spectacular average of 60.31 with 43 hundreds and 54 fifties. He has overtaken Indian batting legends like Sourav Ganguly (11,2221 runs) and Rahul Dravid (10,768 runs). Kohli is now only behind Sachin Tendulkar who has a whopping 18,426 runs in ODIs from 463 matches.

It is important to realize, however, that Kohli is just 30 years of age and has ample time on his hands. At the rate with which he is going, it is likely that Virat Kohli would end up as India’s leading run-scorer in ODIs by the time he is done. That will truly be one of the best Virat Kohli records to cherish.

First batsman to score 20,000 international runs in a decade:

This is indeed a historic accomplishment and will go down as one of the great Virat Kohli records of all time.

If Steve Smith of Australia is the modern day Don Bradman of Test cricket, Virat Kohli has attained a similar status in ODI cricket. At the time of writing, Virat Kohli had the best ever batting average in ODI cricket (among batsmen who have batted a minimum of 50 innings). Kohli’s current ODI average stands at a sensational 60.31 – no other batsman with more than 50 innings has maintained an average of 60-plus in their career. Kohli is above batting greats like Michael Bevan (53.58) and AB De Villiers (53.50). The only current batsman who comes close to Kohli in terms of batting average is Pakistan’s Babar Azam who has an average of 53.55 after 72 ODIs.

It can be safely said that Kohli is likely to end his career by having the best batting average in ODIs.

One of the most exceptional Virat Kohli records was achieved on October 24, 2018. It was on this date that Kohli went past Sachin Tendulkar to become the fastest batsman to reach 10000 ODI runs. Kohli achieved this milestone in his 205th ODI innings, 54 innings lesser that Sachin. Another key point is that Kohli reached this landmark after 10 years and 67 days in international cricket – the quickest by any batsman in history. Sachin had reached there after 11 years and 103 days.

Kohli marked the occasion by slamming a sparkling unbeaten 157 against the West Indies at Visakhapatnam.

Most double centuries by a captain in Test matches:

Thus, the Indian captain is in esteemed company and this is one of those Virat Kohli records that he would be rather proud of.

Virat Kohli records – Most centuries by any batsman in ODI run-chases:

The second on the list of most hundreds in the 2nd innings of ODIs is Sachin Tendulkar (15), followed by Rohit Sharma (13).

Most 100s by a captain in a calendar year in ODIs:

As has been noted already, Virat Kohli is an ODI legend. Out of the several Virat Kohli records, quite a few might get unnoticed. One of those is that he has the most 100s by a captain in a calendar year in ODIs. Kohli scored 6 ODI hundreds in 2017 to secure this special record. Amazingly, Kohli repeated the feat the very next year by striking 6 ODI hundreds in the calendar year of 2018.

Before Kohli attained this milestone, the record for most hundreds by a captain in a calendar year in ODIs was 5. Sourav Ganguly, Ricky Ponting and Greame Smith had their names on this record before Kohli overtook them.

Virat Kohli records – Most ODI runs in a calendar year as a captain:

The year 2017 was rather special for Kohli, the batsman and the captain. He went on to amass 1460 runs in 2017 in just 26 ODIs at an incredible average of 76.84. This is the most number of ODI runs scored by a captain in a calendar year. The record was previously held by Australia’s Ricky Ponting who had collected an impressive 1,424 runs back in 2007.

Most runs in a single edition of Indian Premier League:

While Virat Kohli is an ODI legend, he also has remarkable exploits in T20 cricket. The 2016 edition of the Indian Premier League (IPL), especially, saw Kohli go berserk. Representing the Royal Challengers Bangalore, Kohli piled up 973 runs that season with 4 hundreds. Prior to him, the record was held by the West Indian legend Chris Gayle who had smashed 733 runs in the 2012 edition of the IPL.

Thus, the IPL too has now been graced by the special Virat Kohli records.

Virat Kohli, the Test batsman is often overlooked. However, he has been quite impressive in the longest format already and has led from the front. In the calendar years of 2016, 2017 and 2018, Kohli accumulated 1,215 runs, 1,059 runs and 1,322 runs respectively. With this deed, Kohli became the first Test captain and the first Indian to score more than 1,000 Test runs in three consecutive calendar years.

For this reason, Kohli is considered a true batting genius.

After being anointed the Test captain, Virat Kohli has taken the Indian team to great heights. After India beat the West Indies 2-0 in 2019, Kohli became India’s most successful Test captain with 28 wins from 48 matches. Kohli overtook his predecessor MS Dhoni who had 27 Test wins in 60 matches. Furthermore, Kohli is now also the most successful Indian Test skipper away from home with 13 Test wins in his kitty from 27 matches. The record was previously held by Sourav Ganguly who had 11 away Test wins in 28 matches.

As has been noted above, the list of Virat Kohli records is truly extensive. Which is your favourite from the aforementioned ones?