Certain characters have a lasting charisma and they delegate an actor to almost become a true version of the same. One of these actors is Hugh Jackman and his character Logan, a.k.a Wolverine. While Jackman has played the role of Wolverine in various X-Men and standalone movies, the role eventually played a huge role in his life and contributed largely to Hugh Jackman net worth of $150 Million.

There is a lot that this talented actor and an equally, if not more, talented dancer and singer has done in his career which has eventually led him on to the path of becoming a multi-millionaire.

Jackman’s talent has been resurrected in a ton of his work both before and after his most popular role and today we’ll go through his early life, career till now and what all he plans to do in the upcoming future which both directly and indirectly contributes to Hugh Jackman net worth.

Born on 12th October’1968 in Sydney, New South Wales, Jackman was born to a Cambridge-trained accountant Christopher John Jackman and Grace McNeil. He is the youngest of 5 and after his parent’s divorce, when he was 8-years-old, Jackman remained in Australia with his father and 2 brothers, while his mother shifted back to Britain with his 2 sisters.

Reel-life Wolverine was studying at the University of Technology, Sydney when he realized his love for acting and performing and after completing his degree, he went out to achieve it.

Jackman’s first stint with professional acting was back in 1995 on the show Correli which was an Australian television 10-part series, first broadcast by ABC TV. The show also had Deborra-Lee Furness as prison psychologist Louisa Correlli.

Post this, he did a number of other TV shows and alongside started earning recognition for his performances off the television set. His work on stage in productions of Sunset Boulevard, Beauty and the Beast, and in Trevor Nunn’s acclaimed Royal National Theater production of Oklahoma was appreciated and loved by many.

In 2004, he won various awards for his Broadway projection of Australian songwriter-performer Peter Allen in the hit musical, The Boy from Oz, and co-starred with Daniel Craig in the play A Steady Rain.

2000 was also the time when he landed on one of his most iconic projects, X-Men and continued to appear in the role in as latest as 2018. This has made Hugh Jackman the longest live-action superhero ever.

Apart from Wolverine and Logan, Jackman has also worked on some other great projects like Swordfish (2001), Leopold (2001), Van Helsing (2004), and The Prestige (2006). In the midst of all this, Jackman was also offered the emblematic role of James Bond which he apparently turned down and chose to return to the Marvel Cinematic Universe.

Other great projects contributing to Hugh Jackman net worth include Les Miserables (2012), Pan (2015) and the most recent one, The Greatest Showman (2017) alongside Zac Efron and Zendaya.

Apart from his film and stage career, there are a bunch of other side-projects that the actor is working on and that are equally contributing to Hugh Jackman net worth. These side-projects include Seed Productions which Jackman co-owns with John Palermo and started in 2005.

The company has invested in a variety of proposals like Balance and RM Williams. Jackman also has two cafes in NYC, however, all the income that is generated from these cafes are directed towards communities in need worldwide.

The couple met his partner on the sets of his first television show, Corelli in 1995 and went on to wed Deborra-Lee Furness just a year later. The couple is happily married since then and adopted two beautiful children, Oscar and Ava.

Suggested Read: Joaquin Phoenix Net Worth – How Rich is the Actor

Hugh Jackman net worth is an amalgamation of all his work in the film, television and theatre industry. The actor has also lent his voice for a bunch of animated films and hosted the esteemed Tony Awards three times.

His accolades include an Emmy, two Tony’s and a Golden Globe.

As of now, the actor’s net worth accounts for a whopping $150 Million. 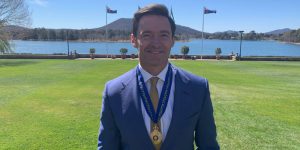