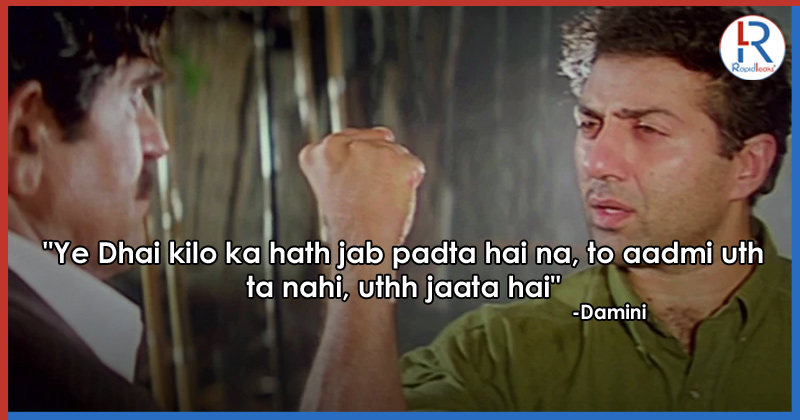 Sunny Deol was born on 19 October 1956 which makes him a Libran. Librans are known to be idealistic, social and soft mannered people, which is completely opposed to his image as portrayed by the movies. In the movies that he acted in, he is the quintessential angry, big guy who knocks off the anti-hero with a swish of his left hand. His immense fan following has not fazed even with the dwindling number of box office hits. At the peak of his career he has numerous blockbusters to his credit, but what has really survived the test of time are his eternal dialogues which he delivered in his memorable tone and voice. Hereby, we present the most iconic Sunny Deol dialogues etched in our hearts forever.

These are not the only ones which have been etched in fan’s memories and the list can be unending. We have tried to brush up on some other very impactful dialogues by Sunny Deol in his various other movies which were hits and miss too.

These are the most iconic Sunny Deol dialogues for you

I am sure you must have read all the dialogues in Sunny Deol voice in your mind. That is the power of his screen presence.

Suggested Read: 10 Of The Most Iconic Sanjay Dutt Dialogues Ever

If you have any other dialogues by Sunny Deol which you want us to add to this list please share them with us in the comments.