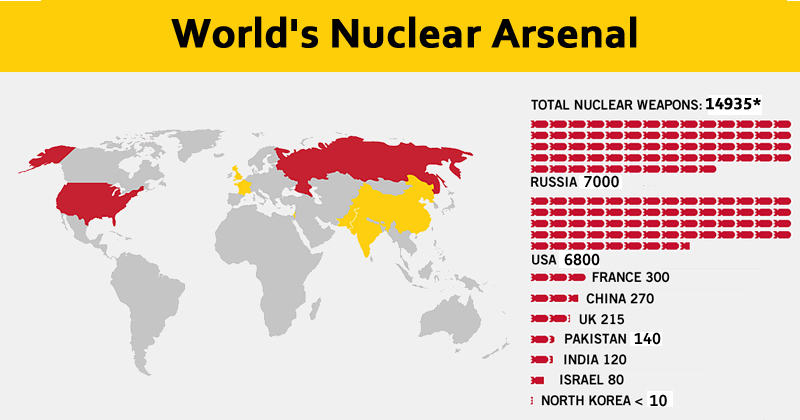 The biggest Sin of mankind is to possess the power of ultimate destruction and incite the fear of that power amongst its own race to achieve political and economic goals. If history teaches us one thing, the craving for power and more power always turns into megalomania. After July 16th, 1945, when the first nuclear test was conducted successfully by the United States of America, the whole world slipped into Madness to achieve the ultimate destruction capability. The world saw the destruction capabilities of that Power as well in 1945. Since then, the destructive capabilities have only increased in number with countries joining in every decade. 65 years after the first nuclear test, we decide to take a look at the destructive capabilities of each country that possesses nuclear weapons.

The only country to have used a nuclear weapon ever in a war possesses around 6800 Nuclear Warheads. The United States spends more on its nuclear Arsenal than all the other countries combined. At the height of the cold war, the United States contained 31175 warheads which have now been reduced to 6800.

Russia( then the Soviet Union) tested its first nuclear weapon in 1949. Currently, Russia has around 7000 nuclear warheads. Russia also has the largest bomb called ‘The Tsar bomb’ which has a capability of hundred megatons is approximately 5000 times more powerful than ‘ Fat man'(The one dropped on Nagasaki).

The United Kingdom is known to have collaborated closely with the United States in Canada during the Manhattan Project. The UK tested its first nuclear weapon in 1952. UK today has 215 nuclear warheads and is overhauling its nuclear Arsenal since 2016.

France has a nuclear Arsenal of 300 warheads. France signed NPT which is the Nuclear Non-Proliferation Treaty in 1992 whose objective is the spread of nuclear weapons.

China has declared to possess 270 warheads, however, is thought to have stockpiled around 100 to 400 warheads. China has developed one of the best delivery methods that are the Dongfeng Missiles which has a Strike range of 12000 km.

India tested its nuclear capabilities in 1974 with project name ‘Smiling Buddha’. India tested the first bomb in 1998 under ‘Operation Shakti’. Indian officials rejected NPT in 1960 stating arguing that it unnecessarily restricted peaceful activity. India has also developed the world’s most accurate missile technology ‘Agni 4’ which has CEP(circular error probable) or accuracy of <10m is 100 times more accurate than any of its competitors around the world. India has around of 120 nuclear warheads.

Pakistan is estimated to have stockpiled around 140 warheads. Pakistan also tested its nuclear weapons in 1998 with equipment and material supplied mainly by Western Nations. In2004, Pakistani metallurgist Abdul Qadeer Khan, who was the head of Pakistani nuclear program confessed 2 heading an international black market ring to sell nuclear weapons Technology. It is projected that by 2020, Pakistan would have enough fissile material for 200 Warheads.

Israel neither confirms nor denies having weapons however amongst speculations and debates Israel supposedly as the 80 nuclear warheads and can be categorized as a “wild card”. Israel has also developed the famous’ Jericho’ missile which is an ICBM(Inter-Continental Ballistic Missile) to deliver the Warhead.

In the New Years address of 2018, North Korean leader Kim Jong-un declared that the entire mainland of US is within the range of North Korea’s nuclear weapons and the nuclear button is always on the desk of his office. North Korea is supposed to have less than 10 warheads but it is not known if it has the delivery capabilities for the Warhead.

There are a total of 14935* warheads declared by countries that have nuclear weapons technology. There are five Nations (Belgium, Germany, Italy, Netherlands and Turkey) that host US nuclear weapons as a part of NATO’s nuclear sharing policy. The top 4 countries hold the power to destroy the world completely and start the Ice Age again. There are some steps taken by the countries in United Nations to reduce the Nuclear Arsenal globally, however, the majority of these nation do not hold Nuclear weapons and the ones that do won’t participate for obvious reasons. In July 2017, the majority of the world’s nations voted in favor of adopting a landmark global agreement to ban nuclear weapons, officially known as the ‘Treaty on the Prohibition of Nuclear Weapons’. However, it seems like a long shot but still worth a try.