Home Videos Tragedy Or Comedy? This Stand Up Bit By Amit Sharma Leaves You... 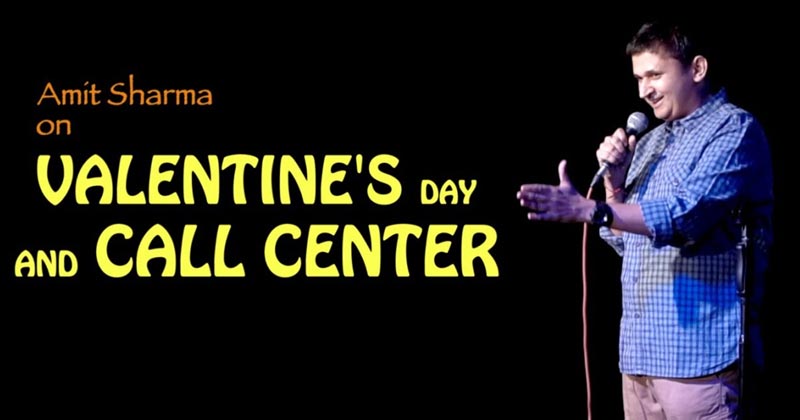 Indians in the recent years have become quite informed about various western customs and cultures – Thanks to satellite TV and Smart Phones. We have also become quite good at celebrating western festivals and centenaries be it Mother’s Day or Halloween. But nothing can beat the jubilation and celebration that surrounds The Valentine’s Day.

As per the legend, during his imprisonment Saint, Valentine restored sight to the blind daughter of his judge, and before his execution, he wrote her a letter signed “Your Valentine” as a farewell.

In the present time, this day is associated with romantic love and has evolved into an occasion in which lovers express their love for each other by presenting flowers, offering confectionery, gifts and greeting cards.

Now, the above story is something we all know and looks pretty usual from a normal person’s point of view.

But this is not the case for comedian Amit Sharma. Born on February the 14th, he always considered himself a born Casanova but despite several attempts he never could manage to have a girlfriend.

Amit Sharma tells us his real life story with hilarious anecdotes on how it feels when you are looked upon as a born Valentine and are never able to impress a girl. This story revolves around how at every chance his friends made fun of him and soon his parents too joined in.

The story of him being low and depressed and even contemplating death is bizarre and funny at the same time. The various attempts of getting a girlfriend and then ending up in an arranged marriage, the voyage of Amit Sharma’s life is more of a tragedy in comedy. Inspired by real life events this stand up performance is a must watch.

The awkward situations of his life and the delivery timing compliment each other and make his performance worth watching. So get ready to laugh out loud.

Don’t try any of his attempts to get a girl, you will end up disappointing yourself.