Home Videos AIB Pyaar Ek Dhokha Hai After Movie 2018: This Is What Went... 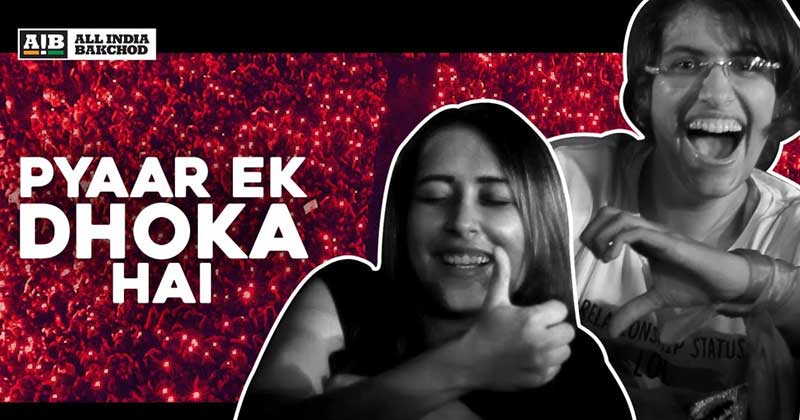 Love can be different things to different people and by now, we’re all well aware of it. While a majority of people in love celebrated this year’s valentine’s day with their loved ones, creating memories for forever, there were roughly some 5000 single people in Mumbai who gathered at Kamgar Krida Bhavan, to shout Pyaar Ek Dhokha Hai, on the top of voice.

The event was already a hit on paper and on social media, however, it was the massive turn out that made the event extraordinary. A bunch of comedians and actors associated with AIB, along with the original group, came together to entertain the masses, all free of any cost. Now, who wouldn’t want to be a part of something like this?

However, much like millions of other singles who were not able to attend the event, all because of the distance, can finally have a look inside all that really went down at the event. This includes little snippets from the performances and the great oath ceremony at the Pyaar Ek Dhokha Hai event.

All India Bakchod (AIB) released Pyaar Ek Dhokha Hai after movie 2018 and it looks entertaining AF. One, even in their wildest dreams would have thought of something like this actually coming true. But somehow, it did come true, all thanks to the quirk masters of the country, who have almost mastered the art of road not taken, with all of their ideas and thoughts.

Even though it is a very small snippet from a really interesting and entertaining gathering, each and every second of the after movie is just worth it.

As AIB described their event, “Valentine’s Day has been about couples until 5000 crazy happy singles marked ‘going’ to an unusual facebook event”, which is a true story. All of this was started as a massive joke and before the team even realised it, people were totally up for something as crazy and funny as this. Which is why the team of AIB decided to bring the joke to life for their equally crazy audience.

With the massive success of Pyaar Ek Dhokha Hai after movie 2018, one just can’t wait for the event to happen again next year and maybe next time, we can all be a part of that?