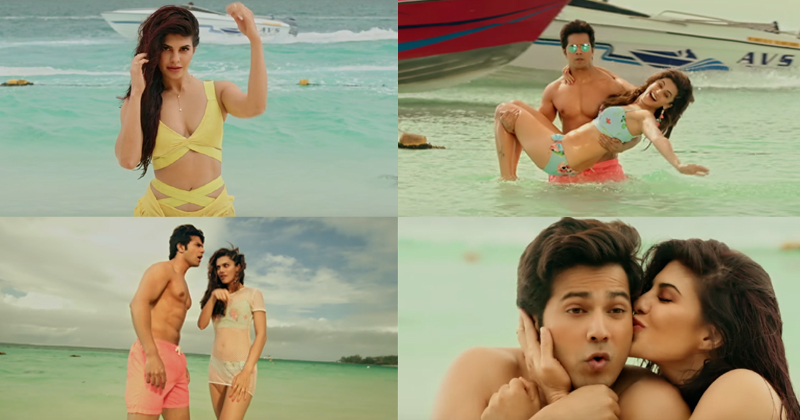 ‘Aa To Sahii’ from Judwaa 2 is here and after 3 frizzy spirited songs, this one is a perfect blend of romance and balanced music. But!…. That is not what makes this song special. The first few frame instantly make you recall that Salman Khan did a similar situational song in Judwaa – ‘Duniya Mein Aaye Ho To Love Karlo’. So, basically, Varun Dhawan is romancing with the wrong girls in ‘Aa To Sahii’.

Basically, just like Salman, Varun too falls in a situation where the NRI Varun ( who is basically in love with Jacqueline Fernandez) has to hang out with Taapsee Pannu and the Mumbaikar Varun (who, obviously is Taapsee’s lover) has to entertain Jacqueline in ‘Aa To Sahii’. Ring A Bell? Salman was doing the same in ‘Duniya Me Aaye’ with Karishma Kapoor and Rambha. If you are still confused, watch it yourself.

‘Aa To Sahii’ is a mild romantic track with exotic locations and oozing with hotness as we get to see Taapsee in a Bikini Avatar, Jacqueline is raising temperature wearing those sexy beach dresses and the bonus is we get to see double Varun Dhawan dripping with sensuousness in his perfectly sculptured body.

‘Aa To Sahii’ is rendered in the voices of Meet Bros and Neha Kakkar. The rap in the song is done by Roach Killa and the lyrics are penned by Sonu Saggu. The music of the song is composed by Meet Bros.

If ‘Aa To Sahii’ is giving you the same nostalgic feeling that it gave to us, here is ‘Duniya Mein Aaye ‘song for you to watch and walk down the memory lane.