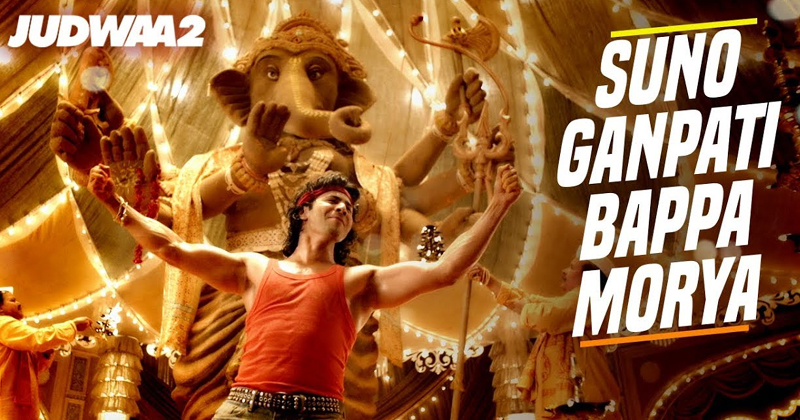 ‘Suno Ganpati Bappa Morya’ is finally out and it is the most entertaining and happening Ganesh Chaturthi song ever. The song is performed by none other than Varun Dhawan in his quirky style and you will love it instantly. Judwaa 2 is a sequel/remake of Salman Khan starrer Judwaa, and Varun is playing the role played by Salman. Varun is certainly a better dancer than Salman but in Suno Ganpati Bappa Morya, you will get to see Varun moving just like his role model -Salman, in fact, a lot better than him.

‘Suno Ganpati Bappa Morya’ is a fun festive song where Varun is literally complaining about girl trouble to Ganesha. The set is vibrant, the music is energetic and most of all, Varun’s charming moves and expressions keep your eyes hooked only on him. The song is oozing with such celebration and energy that you will not be able to resist the urge of shaking your leg on Suno Ganpati Bappa Morya.

It looks like Varun has a fight with Vivan Bhathena, who is playing the villain in the movie. Amit Mishra’s engaging voice has made this song delightful. Danish Sabri’s lyrics are perfectly complementing the enthralling music composed by Sajid Wajid.

Judwaa 2  is directed by David Dhawan and is releasing in theaters on this Dussehra, 29 September 2017.