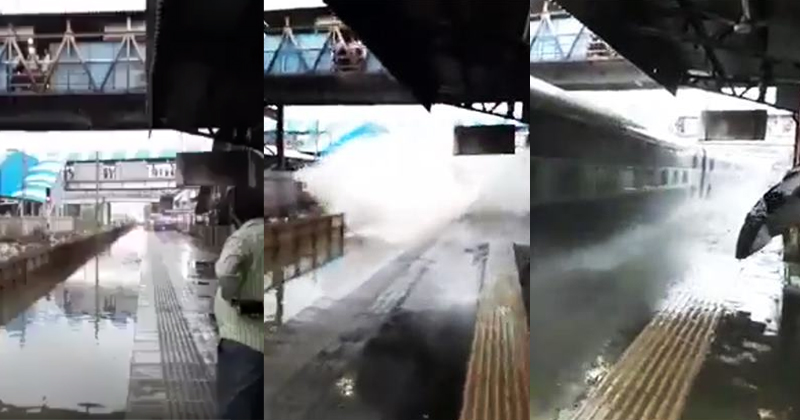 Heavy rains have put Maharashtra’s capital city Mumbai to a halt and the same has adversely affected the daily lives of people living in the city as well as the nearby suburban area. According to a report, in 24 hours starting at 8:30am on September 19, Mumbai witnessed 304 mm of rainfall, making it the wettest September day in over 100-year recorded history of the city. This also means that in these 24 hours, Mumbai received as much rain as it normally does in the entire month of September.

Mumbai Rains have caused water-logging in many areas of the city as well as several trains and flights have been canceled in the aftermath of this situation. While the internet is flooded with videos showing the sorry state of the city roads, now there has emerged a video which shows how devastated the Railways system is in the city as well as the nearby suburban areas.

In the video, a superfast train can be seen zooming past the platform on a flooded track creating a wave of water which engulfed the entire platform, leaving unsuspecting commuters drenched despite them trying to find cover.

Railways should immediately terminate driver of this Mumbai train. Running train like james bond when water is above 5" over railway tracks. pic.twitter.com/AL5UWFWY9a

Trains in Mumbai have been moving at slow speeds because of heavy rainfall but this one clearly left passengers waiting on the platform in shock as this was not something they signed for. While Railway officials have said if the track is clear then trains can move at a certain speed even in the case of water level being few inches above the track, this particular train was moving at high speed despite those tracks being submerged in water.

While the officials have come out to say that since the video was shot from a close distance the train seems to be moving very fast but the reality is something else and it is slower than what appears in the video which is said to be filmed at Nallasopara Station which is situated on the outskirts of Mumbai.

That being said, there is no denying the fact that in these conditions, Train drives are specifically told to slow down near submerged tracks but that wasn’t the case here and considering the recent derailing accidents, one needs to be cautious in these type of conditions.