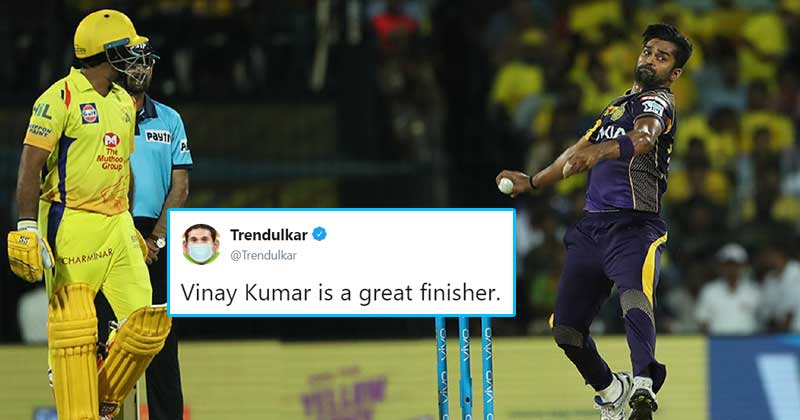 IPL 2018 is proceeding every day with some of the most interesting and fun-to-watch matches. From unexpected turns to records being churned out with every inning, there’s so much happening in each and every IPL match that we can just not stop watching them. And, so did something incredibly hilarious happened in yesterday’s match. No, we’re not talking about the shoe thrown at the Ravindra Jadeja and Faf du Plessis, though that was also something unusual. But we’re talking about the ending of the match.

The game commenced with KKR batting first in which the team managed to pull out an impressive target of 203 runs. Now, the spotlight was on CSK, who in their first match gave an inning people won’t be able to forget for a long time to come. And, they managed to do it once again. This time, the luck was on Andre Russell’s side, through which he was able to score 11 sixes. Yet, the team was short of something, due to which they’re left with 17 runs to win in the last over of the match. KKR was on the verge of winning the match, and then Vinay Kumar happened.

With Vinay Kumar bowling, Dwayne Bravo and Ravindra Jadeja managed to knock off 17 runs. And when Jadeja hit the final six, Vinay Kumar’s fate was sealed.

Netizens spare no one which is why they immediately came after Vinay Kumar, loaded with some of the hilarious memes and similarities. Check out some of the best from the lot over here:

A. You never know which team they are playing for.#CSKvKKR

Someone threw a shoe at Faf du Plessis.
Absolutely deplorable behaviour.
Except…
The dude who threw the shoe has a better arm than Vinay Kumar.#CSKvKKR

Game was lost when 17 runs were required on 6 balls, 17 runs for Vinay Kumar is like breakfast. Anything below 37 is unsafe.
Even 37 is unsafe.#CSKvKKR

I Swear That Was Vinay Kumar. That Wasn't Me Wearing His Mask. Apna Ek Alag Hi Standard Hai That No One Can Match. Pls Stop Blaming Me. ? #CSKvsKKR #CSKvKKR #IPL2018

The toughest battle right is 'Who is a bigger chutiya?

Vinay Kumar is a great finisher.

You have to say with all his experience Vinay Kumar was poor. Both games last over poor @KKRiders . Kamlesh Nagarkoti please next game. Super match yet again.

Imagine KKR fans having to look at SRK's face close up in addition to Vinay Kumar's bowling. Double jeopardy! #IPL

Vinay Kumar is so average that if you make a list of most average bowlers ever, he will be average amongst them too.

My Respect for Rohit increased 10 Times because He won IPL with vinay Kumar.

Has anyone seen Vinay Kumar & Ashok Dinda together? No? I thought so.

In the end, we would like to say, it’s okay Vinay Kumar. Better luck next time.