Home Technology Science Why 1 Is Not a Prime Number? 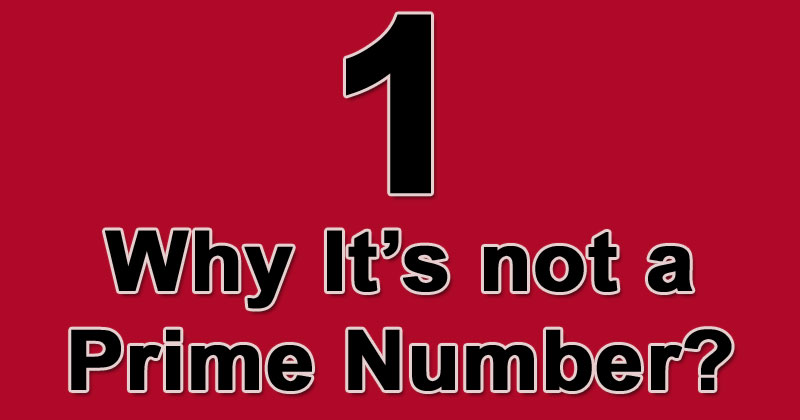 The concept of prime numbers is widely known. Why the 1 is not a prime number remains a mystery to many people long after school. The question ‘Why 1 Is Not a Prime Number?’ is closely related to the definition and nature of the prime numbers. We will see that it makes sense not to count the 1 as a prime.

What exactly is a prime number?

There have been several discussions about the number 1 in the past 250 years. Some mathematicians classified the 1 as a prime number, but others did not. So the solution to the question does not seem to be that simple. A positive integer that is divisible only by 1 and itself without a remainder is called a prime number. For example, the 7 is only divisible by 1 and 7. The other numbers are 2, 3, 5, 7, 11, 13, 17, 19 and 23 are prime numbers.

The number 1 is an exception

Why are 0 and 1 not prime numbers?

And why is 1 not a prime number? Well, there were times in mathematics when 1 was considered a prime number. Because 1 can be divided by 1 and by itself without a remainder. These criteria are therefore met. Nevertheless, over the course of the last century, it has been decided by definition to no longer consider 1 as a prime number. The reason for this was that the 1 has only one divisor while the other prime numbers have two divisors. In addition, the prime factorization with a 1 would not be unambiguous and that is why 1 is not a prime number.

What are the benefits of prime numbers?

If you keep in mind the meaning of prime numbers and then imagine that 1 is a prime number, you can also understand why mathematicians made an exception to 1. The reason for prime numbers is that you can write any natural number as a product of prime numbers. This is called the prime factorization. For example : 220 = 2*2*5*11.

The decomposition is clear that you cannot use other prime numbers. The fact that natural numbers are composed of prime numbers can be used in many areas of mathematics.

If the 1 were a prime number, you could add it to the prime factorization. This is because a number multiplied by 1 again results in this number. It is also said that 1 is the neutral element of multiplication.