When we set an object in motion in our daily life, it automatically returns to a motionless state. A wheel rotates as long as the motor drives it. If you switch off the engine, it slowly comes to a halt. Is the motion of Earth, constantly driven by a force so that they do not come to a standstill? TO find out why Earth rotates on its axis, we need to understand why Earth revolves around the sun.

It is the friction that leads us to this wrong conclusion about why Earth rotates. Frictional forces influence and slow down all movements in our everyday environment by converting kinetic energy into thermal energy.

In fact, until the 17th century, scientists believed that rest was the natural state of all bodies and that a permanent force was needed to keep moving. It was considered that the reason why Earth rotates is because of an external force.

It wasn’t until the English physicist, and astronomer Isaac Newton realized that bodies maintain their state of motion when no forces are acting on them. Forces change the state of motion of a body.

The power of the motor accelerates a car, and the frictional force slows it down. Friction does not play a major role in cosmic movements, so the movement of the planets does not slow down even over billions of years.

A completely force-free body would always remain in a state of motion. As Isaac Newton also recognized that a central force is necessary to keep the planets on their orbit, which is the gravitational pull of the sun.

In the case of an exact circular orbit, gravitation always acts perpendicular to the direction of movement and, therefore, only changes the direction and not the speed of the movement. That is why the planets move in a circle around the sun. Right?

Wrong, In reality, it is a bit more complicated, since most celestial bodies move in elliptical orbits, where both direction and speed change along the course of the orbit. The above statement that planets move in a circular orbit around the sun would be true as long as there is no other force besides gravity,

But we still have not explained Why Earth Rotates on its axis. Since the sun, most planets and moons rotate in the same direction, it is reasonable to assume that the rotation of the celestial bodies has something to do with the history of the formation of the solar system.

Our solar system emerged about 4.6 billion years ago from a large cloud of gas and dust that slowly contracted. This gas cloud increased its rotation during contraction. The physicists call this phenomenon, the conservation of angular momentum.

However, the angular momentum of the cloud was far too massive for a star. The centrifugal force that would occur during the rapid rotation would have prevented the formation of our sun. Therefore, a flat rotating gas and dust disk formed around the sun, which took up a large part of the angular momentum.

We Owe it to The Moon For Our Day And Night

Especially in the early days of the solar system, collisions of celestial bodies also influenced the rotation of the planets. For example, Venus owes its reverse rotation to the impact of an asteroid.

The formation of the moon through the collision of the ancient Earth with a body about the size of a Mars probably changed the rotation of the Earth considerably and is a major reason for why Earth rotates.

Suggested Read: Why Do We Yawn? Is Yawning Contagious? Let’s answer.

According to current knowledge, this event accelerated the rotation of the Earth so that the day on our planet was initially only around 14 hours long, and life would have been a little more difficult or even impossible. With the moon, we come back to the friction to explain why Earth rotates on its axis.

The tides created by the moon gravity on the Earth acted like huge brakes and have therefore slowed the rotation of the Earth to today’s value. Tidal friction currently increases the length of the day by approximately 23 microseconds per year.

At the same time, the moon moves 3.8 centimeters away from Earth every year. Tidal friction has also led to the moon to have a side bound rotation called Tidal Locking, which means that the moon always faces the same side of the Earth. 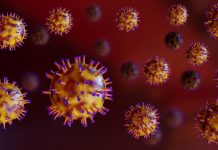