OnePlus 5T, the much-awaited flagship from the Chinese brand, has been in the news for quite a while now and after the huge success of OnePlus 5, its successor is expected to up the ante by a huge margin.

While there were cases reporting some issues with the display and cluttered camera software of OnePlus 5, it still offered some of the flagship specifications and a premium design which made the smartphone a huge success, despite it being the most expensive OnePlus-made smartphone ever.

To continue its dominance in the mid-budget segment, or we can say the entry-level premium flagship segment, the month of November is said to be fixed for the launch of OnePlus 5T, which is expected to bring the same performance credential coupled with an even better design, especially a near bezel-less display.

That said, just days after the first renders of the OnePlus 5T were leaked, a teaser image has surfaced online showing the near bezel-less display and making the previous leak, more trustworthy.

OnePlus 5T would be following the industry display trend of 18:9 aspect ratio and is also expected to come with an even bigger screen than OnePlus 5 (5.5-inch) and of the company decides to keep the dimensions unchanged, the new flagship can still offer 5.99-inch of screen surface due to its bezel-less design. 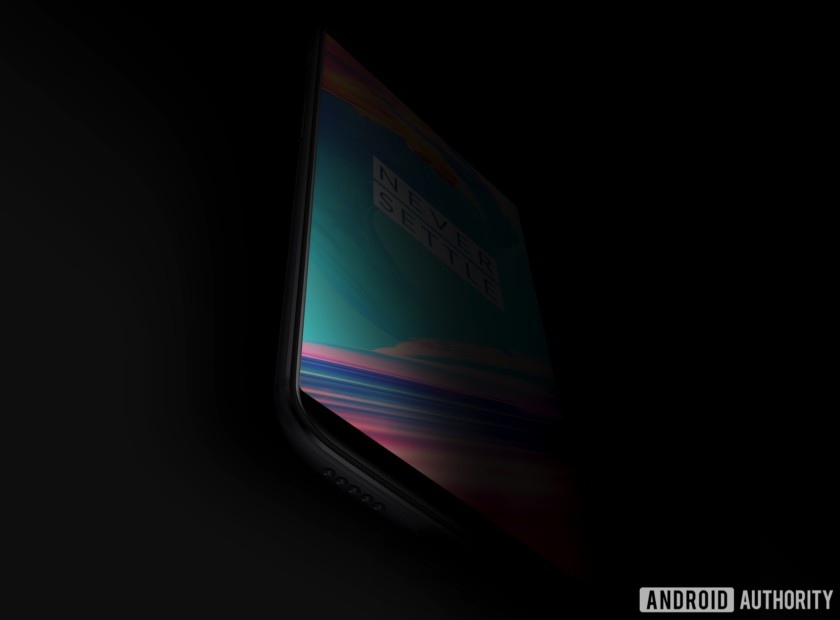 Apart from the display, OnePlus 5T’s teaser image also reveals an aluminum frame as well as a speaker grille. You can expect the smartphone to sport a USB Type-C port at the bottom center, similar to OnePlus 5. However, what will be even more interesting to see is whether OnePlus 5T will ditch the 3.5mm audio jack, considering as how more and more companies are dropping the audio jack, Google with the Pixel 2 (Review) being the most recent case.

Removing the jack could also give OnePlus the room to add a larger battery or even a second speaker grille, but OnePlus co-founder Carl Pei have earlier said that the headphone jack is an important feature, hence OnePlus 5T might not be ditching it, especially after highlighting it as one of the USPs of OnePlus 5 during the phone’s launch.

A fingerprint scanner and dual camera setup at the rear are two of the definitive features of the OnePlus 5T, however, this time, the smartphone might come with a tweaked software keeping in mind the earlier complaints with the current flag bearer of the company.

Other than that, the smartphone is expected to feature the same SD 835 64-bit processor with 6GB/8GB RAM and non-expandable 64GB/128GB of internal storage. Android Oreo 8.0 is also said to debut in the OnePlus series with OxygenOS on top.

Check this space for more updates on OnePlus 5T.