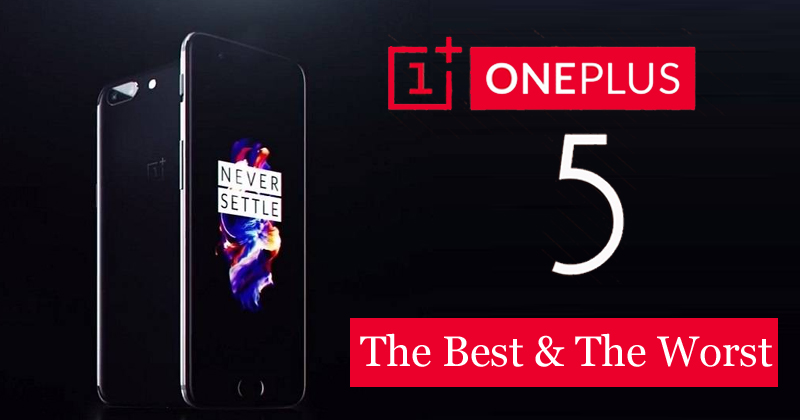 OnePlus 5, the most awaited and highly anticipated smartphone of the year, is finally here and the smartphone has been launched in two variants in India. The 6GB/64GB variant is priced at Rs 32,999 and the 8GB/128GB variants will cost you Rs 37,999. Yes, you read it right. Gone are the days when you can have a flagship killer under the sub-Rs 30,000 mark because OnePlus 5 is here with ‘More’, at least that’s what the company said.

Were you expecting top-notch specs at a rock-bottom price? Well, you were mistaken. It’s not like OnePlus 5 doesn’t come with some of the best features for a flagship killer, it’s just the fact that the price tag has made it one of the mainstream flagship, the likes of which OnePlus 5 will be competing against.

OnePlus 5, by far, is the costliest smartphone from the brand but while the 6GB/64GB variant will sell like hot cakes, it’s the 8GB/128GB variant that will have to justify its price. Yes, it has an SD 835 Chipset, it even has a dual camera setup but with around 25% extra moohlas, a user can for either an iPhone or Google Pixel, which, until last year, was not possible.

OnePlus 3T, the smartphone that OnePlus 5 will be replaced made a segment of its own but this year, things are different and we would really like to see how the smartphone tackles the challenges it will face after poking Samsung Galaxy S8 and the iPhone 7, which the OnePlus 5 looks, too similar to digest, from the back.

What we hate about OnePlus 5

While there is no denying the fact that OnePlus 5 is the best smartphone we have ever seen in this segment and it will still be bought in huge numbers, the company is slowly and gradually is moving towards a category where ‘if you want more, you have to pay more’ and this is not what OnePlus meant for the users, in the first place.

However, there is nothing wrong in doing so, but the edge that earlier OnePlus devices had over the other flagships, has gone missing in the way. The company has positioned OnePlus 5 on that stage, where a user might think about going for a flagship-like device or shell out more and buy an actual premium flagship.

In short, there is nothing like OnePlus 5 in the market as of now and that too below the Rs 40,000-mark but with a little bit more from your pocket, you can go for mainstream flagships like Samsung Galaxy S8 and an iPhone7.

Now the choice is yours!!