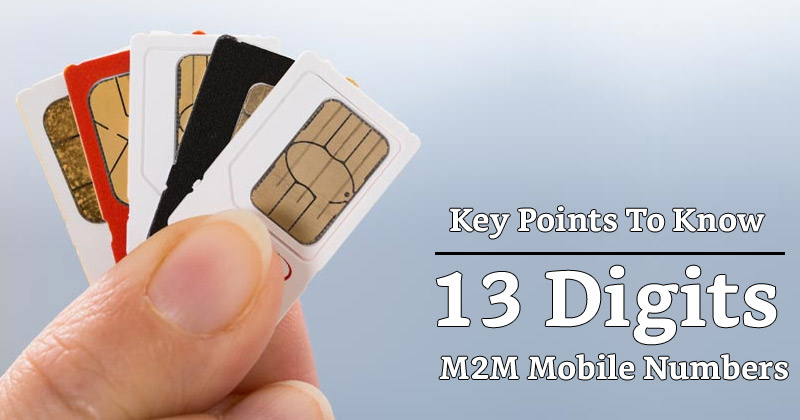 There is a word going on social media that mobile numbers will have 13 digits instead of 10 starting from July 1, 2018. The rumor was triggered just a couple of hours after Department of Telecom (DoT) issued a directive to telecom service providers (TSP) to provide 13-digit M2M (machine-to-machine) mobile numbers for IoT devices.

Well, that is not true and you won’t be issued an M2M Mobile Numbers With 13 Digits from July 1, 2018, as the decision has been taken while keeping in mind the rising number of IoT (internet of things) devices.

The Department of Telecom on January 8, 2018, conveyed the implementation of a 13-digit numbering scheme for M2M communication and the new M2M mobile connections will be allocated a 13-digit number.

M2M stands for Machine-to-machine and the new SIMs will be used for communication, automated transmission as well as measurement between mechanical and electronic devices. It is also important to note that DoT’s recommendations are only meant for M2M SIM cards, and not for regular ones which are used by the general public.

1. Mobile numbers are indeed changing but not for normal telecom service users. The letter written by DoT on February 9, 2018, to telecom companies says that the 13-digit numbers will be used only for M2M SIM cards which will co-exist with the 10-digit numbers.

2. M2M or machine2machine SIM cards will be used in automated machines and they are widely used in machines which run on network connectivity. These machines might range from the smallest of gadgets to big machinery but all of them need Internet or mobile network connectivity in order to perform their basic functioning.

3. M2M Mobile Numbers With 13 Digits made headlines when a letter from DoT was sent to ZTE and Nokia. The letter read, “It is decided that the 13-digit M2M (Machine-to-machine) numbering scheme will be implemented from July 1, 2018. And from this date onwards, all new M2M connections will be allocated only 13-digit numbers.” 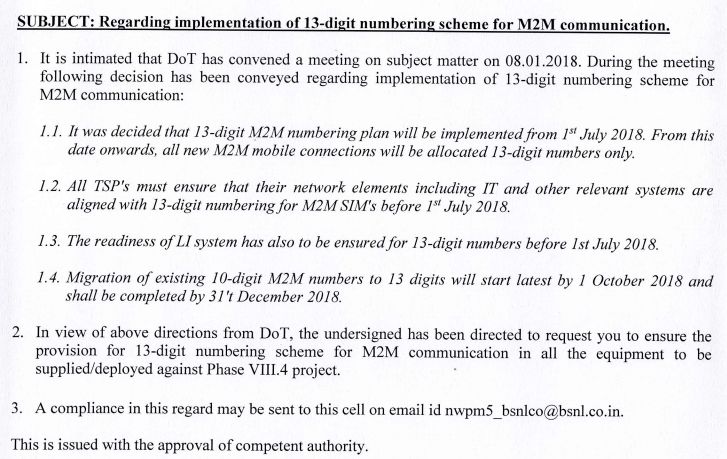 4. Department of Telecommunications (DoT) has notified telecom companies (TSP) to issue only 13-digit numbers for M2M communications. The new numbering scheme will come into effect starting from July 31, 2018, and all new connections will be given a 13-digit number. On the other hand, the existing M2M numbers will be alloted a 13-digit number from October 1, 2018. DoT has set December 31, 2018, as the deadline for the entire migration process.

5. The day these M2M Mobile Numbers With 13 Digits come into play, India will become the country with the longest mobile numbers (excluding country code) as China is the only country, as of now, to have 11-digit mobile numbers.

The M2M SIM cards are required to connect multiple devices (it could be an Airplane, a Ship, connected cars, or even a Bicycle) to the internet while these can be used with regular mobiles as well.

Telecom operators like Airtel, Vodafone, etc already have a dedicated module in works for M2M offerings and the deployment of M2M in sectors such as transport, power, utilities, health, logistics, and shipping will come with an enormous potential of giving a boost to the economic development in India.