Sunrisers Hyderabad not only defeated Royal Challengers Bangalore by eight runs but also thrashed their dream to lift the trophy of IPL for the first time in the final match of Indian Premier League season 9 at the Chinnaswamy Stadium on Sunday.

Hyderabad won the toss and opted to bat and they set a formidable target of 209 runs for Bangalore.

SRH started off slowly as Shikhar Dhawan and David Warner were playing with slow pace but after they got settled both the opening batsmen started scoring quick runs.

Dhawan and Warner played patiently, saving wickets until the seventh over. Dhawan scored 28 runs off 25 balls but Yuzvendra Chalal sent him back on the 4th ball of the 7th over.

Warner was playing patiently, Moises Henriques came to bat and failed to perform. Henriques was dismissed by Jordan in the 10th over of the game. Yuvraj Singh came and played using his experience but Warner who had frustrated RCB for a long time was sent back as he gave a simple catch straight to Abdulla in the 14th over on a delivery bowled by Sreenath Aravind.

Deepak Hooda (3) and Naman  Ojha (7) failed to perform for Hyderabad. Yuvraj Singh and Ben Cutting raised the team in the middle and the final overs. Yuvraj smashed 38 runs off 23 balls with four fours and two sixes, he was trying to score big until he was dismissed by Chris Jordan.

Cutting gave nightmares to RCB in the final over as he smashed 39 runs off 15 balls including four sixes and three fours. After the end of the innings, SRH posted 208 runs with the loss of 7 wickets.

Chasing a big target of 209 runs, RCB got off to a flying start as the opening batsmen Chris Gayle and Virat Kohli were pounding runs quickly.

Chris Gayle smashed a superb 38-balls-76 for Royal Challengers. He rarely gave the chance to Kohli to score and for the first 100 of Bangalore, he alone smashed 74 runs. His 76 runs innings included eight sixes and four fours.

He was smashing as a hit machine who was looking to hit sixes as long as he was on the crease, he was unstoppable until in the 11th over Cutting dismissed him.

Virat Kohli was on the crease and everything looked just fine RCB had a fine batting line-up to support Kohli. Kohli thrashed 54 runs off 35 balls but he was departed soon after Gayle in the 13th over of the game. His innings included two sixes and five fours.

After RCB lost Gayle and Virat none of the batsmen scored more than 20 runs for RCB. Suddenly the game was turned into a heartbreak and disappointment for RCB.

RCB posted 200 runs with the loss of 7 wickets. Ben Cutting produced the best bowling for SRH. 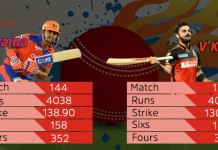