Home Sports F1 Having spent a decade in the wilderness, the French Grand Prix returns... 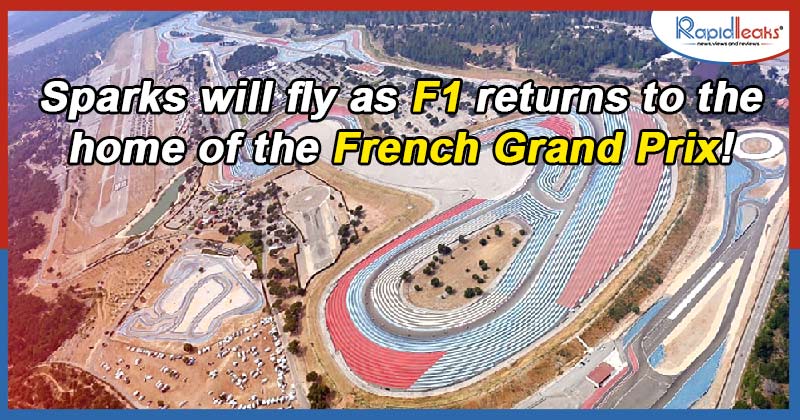 From the cool of Canada, we move on to embrace an air of grandeur as Formula 1 carnival sets foot in Western Europe. Ready for the French Grand Prix, F1 will bite into speed and dig into a fold of history as cars will power around in speeds of over 300 k/hr at the legendary Circuit Paul Ricard after the event spent 10 years in the wilderness.

Round 8 of the 2018 F1 season brings us to the kingly swagger of France, where last a Grand Prix event was held in 2008. Popularly adjudged as a historic racing track, noted for having served the modern template for most contemporary circuits, the French Grand Prix is the oldest event and track on the calendar.

Would you believe the first that the racing event was held in France was way back in 1906? Held on 86 occasions ever since there’s a captivating loop of history here at Circuit Paul Ricard, not a track to be trifled with a lack of respect.

As per normal, Lewis Hamilton and Sebastian Vettel could be expected to go all out in continuing their dancing battle in the current season, that sees the German holding a lead over the Briton by a solitary point.

We could have another and hopefully interesting two-way fight to clinch the race between Ferrari and Mercedes, with Red Bull holding the wild car to pull up a surprise, as ever.

It’s not always that F1 seasons unfurl such a close fight with 7 rounds already done in the pack. Even as Vettel holds an advantage by a whisker of a point, does that really translate into an edge over Hamilton? What will be the most interesting perspective of Sunday’s action-packed French Grand Prix would be to note how dominantly can Hamilton emerge clear of the Ferrari’s, Sebastian Vettel having spoilt Hamilton’s Canada challenge a fortnight ago.

Lewis is not the type of guy who can be kept quiet, and the Mercedes driver could be expected to go all out against Ferrari in dousing the title fight in fire.

Further down the grid, Circuit Paul Ricard can be expected to unfurl some interesting results from the midfield. With the Ferrari versus Mercedes versus Red Bull saga expected to dominate proceedings, can the Force India pull out something special- with both Perez and Ocon experiencing sedate runs thus far in the season, save the only podium the Mexican would grab under unexpected situation at Baku?

If there’s a team that will be raring to go and collect something valuable from the French Grand Prix then it would have to be both McLaren as well as Williams. Purely on mechanical make-up and aerodynamic functioning, the turbo-powered cars haven’t exactly delivered a scintillating season.

Alonso’s mechanical DNF at Spain spoiled his chances of collecting something special amid home fans the same way Lance Stroll’s accident-marred Canadian Grand Prix left his Williams in tatters in the opening lap drama. With Toro Rosso Honda being a clear improvement this season, although P7 on the constructor’s, around 9 points adrift from the Force India Mercedes, can the likes of Gasly and Hartley deliver something special? While Hartley’s current form leaves nothing to the imagination, responsible largely for spoiling Stroll’s Canadian run, Pierre Gasly, who’s already impressed massively, clinching a memorable P4 at Bahrain would be keen to deliver something for his home fans.

As will Romain Grosjean, another French driver who will be curious to at least open his account this season. And could there be a better place to score points other than his home-track?

But when you re-focus on the top draws of the season, one of the hugely polarised names in the current spectre- Max Verstappen- visibly upbeat following a brave P9 and Monaco and a vital third at Montreal would see the French Grand Prix as an important opportunity to collect some vital points. Having delivered an impressive last Grand Prix, for the 20-year-old, who’ll be racing at Paul Ricard for the first time, it will be important to keep the teenagerish “Mad Max” shenanigans at bay.

It doesn’t make for a pretty sight to spot someone as mercurial and daring as Max to be chided for uncontrollable and deplorable racing manoeuvres. That said, what impresses the most at the French Grand Prix is the sheer prospect of having so many the 20 current drivers make their debut on the legendary track.

Lying on the sunny south of France, in between the culturally-vibrant cities of Toulon and Marseille, Circuit Paul Ricard with its smooth and grippy tarmac is set to produce a belter of a race where the drivers will need to hold the edge in countering the ecstatic and noted 2.1 km long Mistral Straight, several fast and long-radius corners in the run to the checkered flag. The 53-lap competition, however, can be expected to demand a perfect balance between car-handling and tyre-management, another litmus test for the connoisseurs of speed out there.

Of the 20 on the grid, 10 weren’t even more when the last French Grand Prix took place.

This is a track that’s been mastered by the superior German-Italian pairing of Michael Schumacher and Ferrari.

Should any among Raikkonen or Bottas finish on top of the 2018 French Grand Prix, it will mark the 50th Finnish victory in F1

Raikkonen, if he grabs pole, doesn’t seem that likely in any prospect, would make him the oldest pole-sitter among the current drivers on the grid.