Home Sports F1 Will The Second-Half Of The Season See A Big Boost Of Performance... 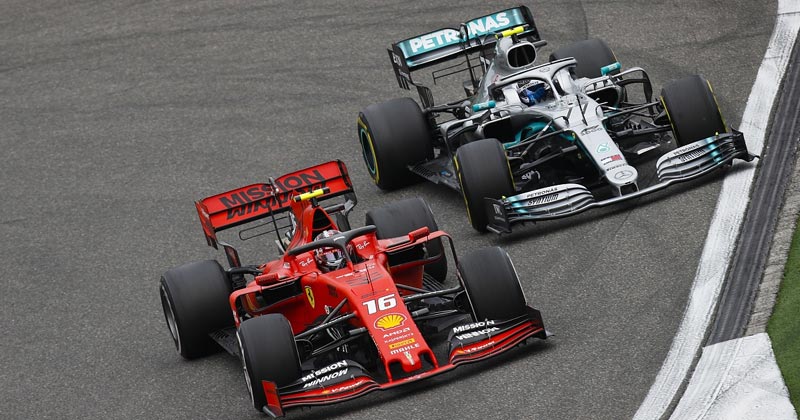 The last that a race was won by a Ferrari driver was well over half a year ago. It was Kimi Raikkonen’s victory at the US Grand Prix of 2018. Since then, the win column stands dry.

In fact, the last time that one saw a Ferrari 1-2 finish upon the conclusion of a Grand Prix was back at the Hungaroring in 2017. It seems a while back, doesn’t it?

Cut to the present moment, Kimi’s already well moved over to another team and there’s a new pairing at Ferrari, one that hasn’t quite hit the bull’s eye- has it?

In fact, it’s only come twice mightily close toward booking the top step of the podium, once at Bahrain this year and the other, at the Canadian Grand Prix. It may not be too wrong to suggest that Ferrari, hit by several instances of Vettel’s underwhelming efforts and lacklustre qualifying efforts have punched significantly below their weight in the first half of the season.

But as the sport remains quiet, plunged deep into its mid-season break, one can’t help but wonder as to what might Ferrari bring to the fore come the second half of the 2019 season?

Will at least one driver from the team- possibly Charles Leclerc- stand up finally to counter ‘Hammertime,’ exhibited yet again, to full perfection by the Silver Arrows? Or will we finally see a Sebastian Vettel resurgence, akin to that fiery drive at the German Grand Prix of 2019 where Vettel arose from the back of the grid to the second spot on the podium in registering arguably his best drive of the season so far?

What should keep Ferrari guessing is how and where can they mount the high-octane come back to the top end of the grid? In a season where not even Valtteri Bottas but Max Verstappen in his Red Bull has proved somewhat of a competition to the unstoppable Lewis Hamilton, it hurts back in Maranello as anywhere where the Prancing Horse flag flutters proudly that no Ferrari driver is even in the top-three of the standings.

Soon, we could see Max usurp Valtteri to emerge the second-best on the grid and the standings. At these times, one supposes that the thoughts of Sebastian Vettel may go back to the Belgian Grand Prix of 2019, the scene of his last and dominant triumph in the red car.

A year back, upon the resumption of the mid-season break with Vettel still hanging on closely to the title bid offered by Lewis eclipsed the Mercedes to register a clinical Ferrari win at the Ardennes. Arguably in a faster car, boosted by superior straight-line speed, the German exulted at Belgium.

In two weeks from now, as Vettel arrives at the scene of his last F1 victory, he’d want nothing more than somehow managing a repeat of the 2018 effort.

For starters, a lot of hopes and if you are Mercedes, then ‘threats’ are pegged on Ferrari’s engine. What can it possibly bring in the remainder of the season- is what everyone’s thinking? Apparently, of all the people, Toto Wolff believes that Ferrari will truly unleash themselves in the second half of the season and that with a new engine upgrade, as reported by a Spanish publication, the Ferraris will be boosted by as much as 20hp.

That may be a significant power upgrade that shall assist the Ferraris to extract something special especially at high-speed circuits that await the 10 teams in the post-mid-season part.

But for now, we will have to wait and watch. Surely, Ferrari would be expected to drive for pride in whatever’s remaining in their bid to contest for the world title.