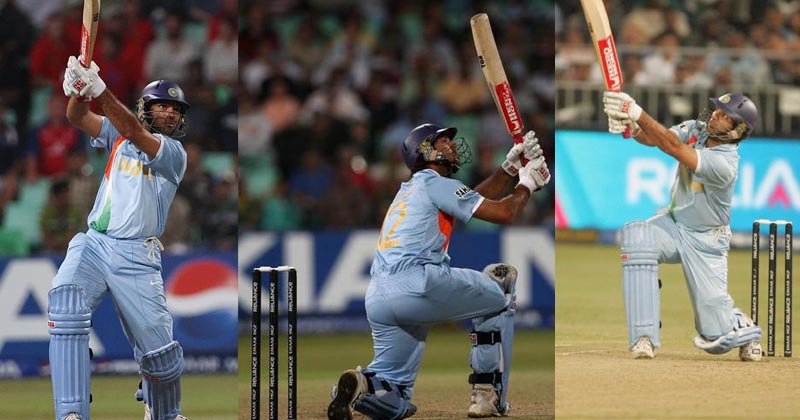 It will be twelve years to that magical moment on September 19, 2019. On this special day, let’s relive Yuvraj Singh’s six sixes one more time.

It was the inaugural World T20 2007 in South Africa. Mahendra Singh Dhoni’s new-look Team India had begun their campaign rather moderately. They had won their first game against Pakistan in the league stage and then were beaten by New Zealand in their first match of the Super Six phase.

With two more matches remaining in the Super Six stage, India needed to win them both to stand a chance to qualify for the semi-finals. Hence, their next encounter – against England on the 19th of September, 2007 at Durban – was of paramount significance for them to stay alive in the competition.

On winning the toss, skipper Dhoni decided to bat first on a surface that looked flat. The idea by the team management was clear – put a huge score on the board and then apply pressure on England while bowling.

The plan appeared to have worked perfectly as the Indian openers Virender Sehwag (68) and Gautam Gambhir (58) put on a terrific 136-run stand in just 14.4 overs.

The platform had thus been set for India. They now needed a good flourish towards the end to end on a strong note. This is exactly what happened next as Yuvraj Singh’s six sixes stole the show.

Before Yuvraj Singh’s six sixes – A glimpse of the massacre that was coming:

In the 16th over of the innings, Gambhir also fell with India’s score being 144-2. The time for India to push on the accelerator was now.

In walked Yuvraj Singh to the crease. The stylish left-hander had had a quiet World Cup so far and was itching to get some runs for the team. In fact, during the opening partnership, Yuvi could be seen practicing shadow batting in the dugout.

Something about Yuvraj looked different that day. It looked like he wanted to leave a statement. What followed, though, was absolute massacre.

In the second ball he faced, Yuvraj blasted a boundary. Then, in the very next over, he whipped Andrew Flintoff for two consecutive fours. The burly English all-rounder didn’t like this one bit and decided to have a go at the batsman. At the end of the over, two men could be seen exchanging heated words.

Captain MS Dhoni, who was Yuvi’a batting partner at that moment, tried to pacify the batsman. However, it looked like a raw nerve had been struck. Yuvraj, who was already charged up for the match, was now completely pumped up. Many believe that it was this brief altercation that led to Yuvraj Singh’s six sixes.

Stuart Broad bowled the next over and had to face Yuvraj Singh’s wrath.

What followed was absolute carnage.

Ball one was a length one that pitched on the batsman’s legs. Yuvraj cleared his legs and blasted the ball way over the cow corner region for a colossal six.

It was a meaty blow that landed well into the crowd.

Ball two was again delivered on the legs. Displaying his wristwork, the left-hander simply flicked the ball towards the backward square leg region. The ball sailed high into the sky and cleared the ropes with ease to make it the second consecutive six of the over.

Yuvi was now well and truly on his way.

Broad wanted to change his length now. With this in mind, he tried to go for an off-stump line. Ball three, however, turned out to be half-volley outside off-stump. It was as if Yuvraj was waiting precisely for this. He cleared his feet again and smashed the ball cleanly over extra cover for the third consecutive six of the over.

Fireworks exploded all over the ground. The crowd sensed they were witnessing something special. Can there be a chance for the Full Monty? Will the crowd get to see Yuvraj Singh’s six sixes?

A concerned Broad went round the wicket to stop the flow of runs. It didn’t make a difference, though. Ball four turned out to be a full-toss outside off that Yuvi scythed over backward point for the fourth successive six of the over.

It was absolute mayhem now and the crowd had gone into a frenzy. The Indian players in the dugout were clapping in glee. The possibility of Yuvraj Singh’s six sixes looked real now.

The English camp was extremely worried. For this reason, Captain Paul Collingwood had a long discussion with Broad and asked him to go back over the wicket.

Ball five was a benign half-volley on leg-stump. Yuvraj was ready for it. He bent down on one knee and slapped it over midwicket. The ball remained in the sky for a while before crossing the ropes for the fifth successive six of the over.

Stuart Broad was now under immense pressure. For one thing, he wanted to avoid being the first fast bowler in international cricket to be smashed for six sixes in an over. Thus, he looked desperate to stop the Yuvraj onslaught.

Ball six was a gentle length ball on middle-stump. It was the perfect delivery for the Yuvraj, who blasted it disdainfully over wide mid-on for another colossal sixer and with it registered his name in the history books.

With that last six, Yuvraj also reached his 50 off only 12 balls – the fastest in T20I cricket. The crowd was cock-a-hoop. And Broad, specifically, looked shell-shocked.

As a result of this, Yuvraj Singh became the first batsman to hit six sixes in an over in Twenty20 internationals and the fourth in senior cricket at that time. Prior to him, Garry Sobers and Ravi Shastri did it in first-class matches, and South Africa’s Herschelle Gibbs did it in the 2007 ODI World Cup.

On the other hand, Stuart Broad had to face the ignominy of being the first fast bowler in international cricket to go for six sixes in one over.

Yuvraj’s blitzkrieg ended on a sensational 58 off 16 balls with 7 sixes and 3 fours. The savage assault had knocked the wind from England’s sails. As a consequence of that effort, India went on to post a huge total of 218-4. Under those circumstances, India looked like the team on top. After a decent bowling show, India won the match by 18 runs.

The night, however, belonged to Yuvraj Singh. He had single-handedly destroyed England and kept India alive in the competition that they eventually won.

That one over changed the fortunes of Team India in the tournament and gave Indian fans much to cheer about for weeks to come. Yuvraj Singh’s six sixes would hence be remembered forever. For its magic. And for its thrill. For its surrealistic feel. And for how it ushered a new dawn in Indian cricket.