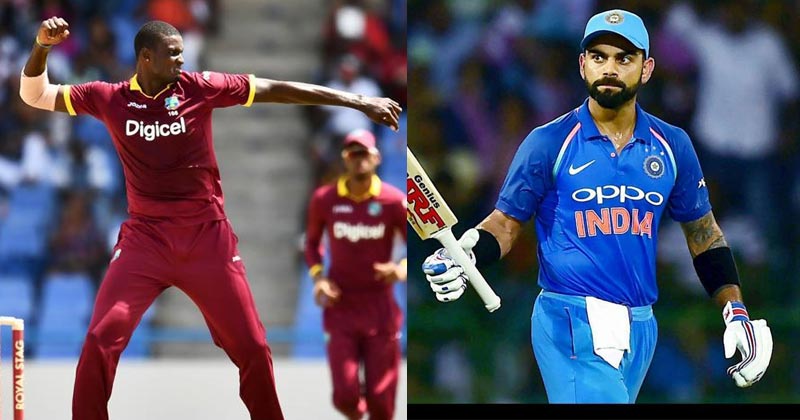 There’s always something exciting on the cards when the West Indies play India. In the past, the two sides have unfurled arguably, modern cricket’s greatest batting rivalry; the enthralling contest between the Master Blaster Sachin Tendulkar and the Prince of Trinidad, Brian Lara.

Although those times are long gone, the interest surrounding both sides and their entertaining brand of cricket haven’t trundled into the unknown.

The last time the two teams faced each other prior to the one-off outing in the 2019 World Cup, India subjected the West Indies to a string of hostility. Virat Kohli‘s team hammered the Windies in all formats of the game when Jason Holder’s team, minus the current stars- Andre Russell, Chris Gayle, Evin Lewis, and the likes- came calling in 2018.

Apart from episodes of tiny mutinies as seen by Hetmyer and Hope’s brilliant ODI centuries and a dogged Test century by Roston Chase, the rest of the team seemed toothless and hardly capable of giving India some fight.

Now is the time when the West Indies play hosts to the mighty Indians, among the best ODI teams in world cricket and right up there alongside the 2019 World Champions, England.

Interestingly, when you instantly imagine the two current captains from the units standing alongside each other, then the only excitement from a Caribbean perspective is that Jason Holder trumps Virat Kohli in the height department.

That’s not to say that the calm West Indian captain doesn’t score on the merits of individual talents. After all, having been wearing the crown of thorns, starting 2016, it’s under Holder’s captaincy that the West Indians have managed to exude some transformation that’s worthily finding itself being compared to a full-on revival mode.

The likes of Cottrell, big-hitting Hetmyer, talented Pooran and the likes are whetting their feet in international careers, determined to prove a point to detractors who are still willing to restrict their side to the template of their famous past.

But truth be told, if he’s to be recognized as someone who’s inspirational, then Jason Holder himself will have to lead his troops and lead by an example against a side that seems formidable given the current composition, there being no dearth of talents in Rohit Sharma, Shikhar Dhawan, Hardik Pandya, Ravindra Jadeja, Jasprit Bumrah, and none other than Kohli at the helm.

In the lines of the imminent series, slated to begin August 3, none other than Sir Viv has shared his views on what promises to be an exciting contest on the cards.

“India-West Indies series have always seen explosive action and I don’t expect anything less this time around. With the current form of the West Indies team, I look forward to them giving a tough competition to the Indian side,” said the great batsman from Antigua.

From Jason Holder’s perspective, there’s more to the contests, despite the T20 side boasting of nearly 9 batsmen, with the inclusion of returning Andre Russell and the returning talents- Keiron Pollard and Sunil Narine. The real contest would be how well can his team pick up a real fight in the ODIs and Tests. The last that West Indians were able to showcase some fight was in the drawn Test at Jamaica, back in 2016, when Chase and Dowrich hung in there for a thrilling but rain-assisted draw.

Interestingly, the likes of Darren Bravo- left out of the squad in all formats will feel having missed out big.

The First T20 undergoes live at Florida on August 3.