Shahid Afridi, for everything as a cricketer he is, has been regarded as one of the most devastating batsmen to ever played for Pakistan and after retiring from his national duties, he is still making new benchmarks for the youngsters to come.

It was the year 1996, when Shahid Afridi made his international debut and scored the fastest ODI century (off 37 balls) in his ever first international innings during a match against Sri Lanka, emerging into the cricket circuit with a ‘Boom’ and ‘Boom Boom Boom’ is what we have seen during his illustrious career.

With having the most number of wickets (97) as well as the most number of man of the match awards in T20 International Cricket, under his belt, Shahid Afridi was born for this format and has given some of the most entertaining performances, over the years.

However, there was one thing that Shahid Afridi still had to do and that was registering a century in the T20 format. While his retirement from International cricket never gave him a chance to do so in International circuit, the 37-year-old has finally managed to go past the 100-runs mark in county cricket. 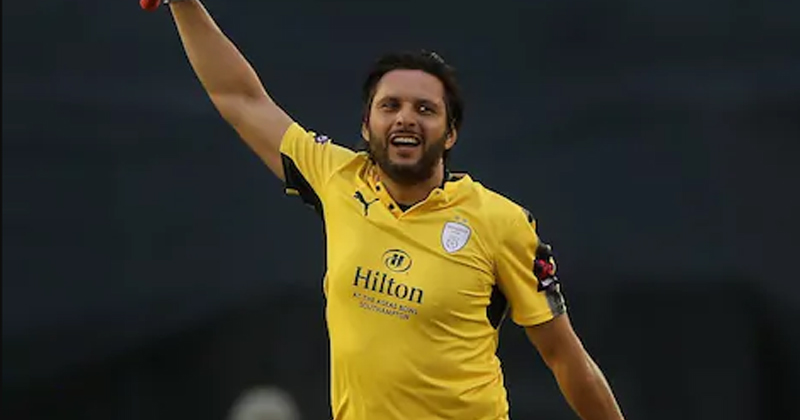 Shahid Afridi became a nightmare for Derbyshire as they were on the verge of reaching NatWest T20 Blast finals for the very first time, and with his brutal display of power with the bat, he scored 101 runs in 43 balls while propelling his team, Hampshire Royals to a huge total of 249/8.

The former Pakistani captain had 50 runs to his name in last 10 matches for Hampshire prior to the T20 Blast quarter-final, but he came good at the right time after smashing his first ever century off just 42 deliveries, which is also the fastest T20 hundred of the year.

Shahid Afridi’s first ever century came up with the help of 10 boundaries and 7 huge sixes, and this was an innings to watch over and over again.

Anyone fancy watching some of @SAfridiOfficial's monster sixes?! 🚀

Be Afridi, be very Afridi when Boom Boom is in the mood 🙌 pic.twitter.com/oe91mhW39N

What about the fours?

Interestingly, Shahid Afridi opened the innings for the first time in NatWest T20 Blast after asking the Hampshire administration to let him do so as he felt wasted at number seven or eight and what a way to prove this than smashing a 42-balls century on the same day?

Moreover, while Shahid Afridi reached his fifty off just 20 balls with a top-edged six, he was dropped on 65 at long-on by Madsen on an Imran Tahir delivery, which literally was the moment where Derbyshire lost the match.

Captain James Vince added 55 runs off 36 deliveries and it was an easy win for Hampshire Royals as Derbyshire could get nowhere near the target and were bowled out 148, thanks to Liam Dawson and Kyle Abbott, who picked up three wickets each, in quick succession.