Nothing has been going well for Ravindra Jadeja as he recently lost his top spot in ICC Test bowlers rankings which came hours after he was rested for the India vs Australia series 2017, along with Ravichandran Ashwin and Yuvraj Singh, among others.

While justifying the decision to leave Ashwin and Ravindra Jadeja out of the ODI series, chief selector MSK Prasad said that spinners Yuzvendra Chahal and Axar Patel were given an extended period due to their impressive showings in Sri Lanka as in the four ODIs in the Island nation, while Chahal claimed five wickets in four matches at an economy of 4.70, Patel scalped six at 3.85 runs per over.

However, it seems like Ravindra Jadeja has not taken his ousting very well as he thinks that him being not selected for the ODI leg of India vs Australia series is a huge setback for him.

How do we know this? Well, we won’t say that we are sure about this but after reading his tweet that he deleted, later on, hints to wards that directions.

Here is the tweet that he deleted within a couple of hours of posting it. 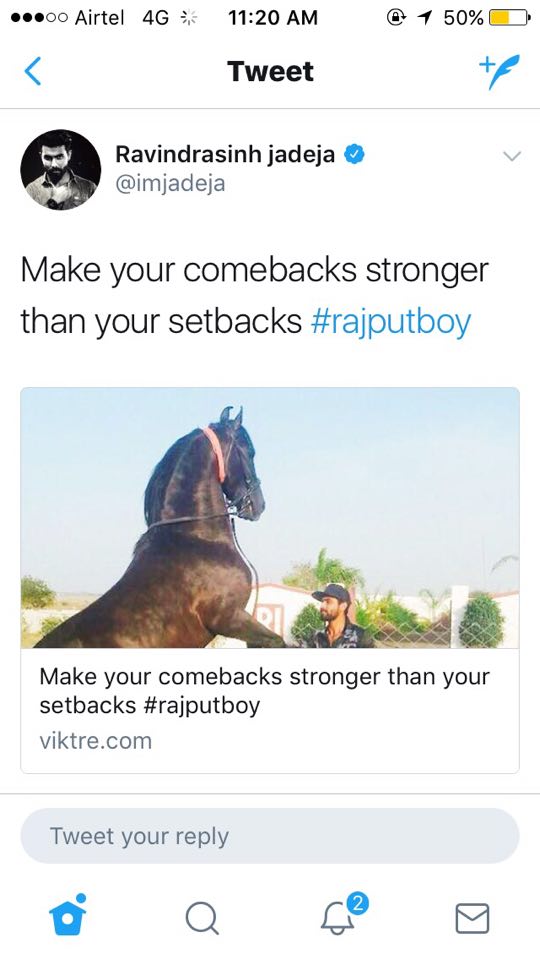 Although the selectors have never admitted this in open, it does appear that both Ravichandran Ashwin and Ravindra Jadeja have never emerged from the failures of 2017 ICC Champions Trophy in England where Ashwin managed just one wicket in three games at an economy of 5.75, while Jadeja took four wickets in five games at 5.92. Moreover, both were particularly disappointing in the Champions Trophy final against Pakistan at The Oval, conceding 137 runs in the wicket-less spell of 18 overs.

Going by the statistics of the last two years, both Ravichandran Ashwin and Ravindra Jadeja have struggled to manage impressive numbers. In 15 ODIs, off-spinner Ashwin has just 16 scalps while Jadeja has 21 wickets under his belt from 25 games.

That being said, their lack of wickets doesn’t take away their greatness in Test cricket, but the question which still remains is, why such a long “rest” has been given to them and how quick will they manage to shed of the rust of not playing as the ‘Men In Blue’?

As for the India vs Australia 2017 squad, the home team has just made three changes to the side after the Sri Lankan tour as Umesh Yadav and Mohammed Shami have been picked while Shardul Thakur didn’t manage to secure a berth this time.

The Indian Squad For The First Three ODIs Against Australia In The 5-Match Series.