Players And World Reacts To The Shameful Scenes At Cuttack

Cuttack Cricket fans have made India talk of the town for all the wrong reasons. The disgraceful display of spectators at the Barabati Stadium in Cuttack has raised questions on India’s image in International Cricket. Is this how we are planning to pay tribute to Nelson Mandela And Mahatma Gandhi? 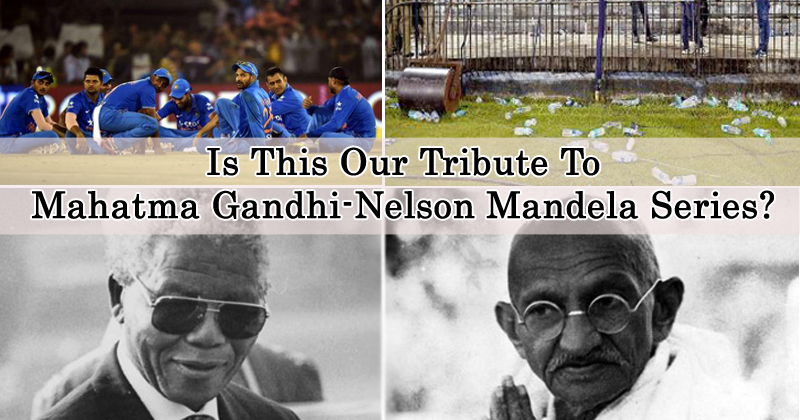 Indian Cricketers always deliver a tremendous level of sportsmanship and play their game with the right spirits. But the fans of cricket in India need to understand that it is a game, and winning and losing is a part of it. Cricket is called a Gentlemen’s game and showing such distasteful angry reactions on the players. Is this how you treat them?

Several former players asked to ban the stadium and this violent display from the crowd essentially needs a strict action. Discipline should be taken as a bitter medicine and if banning the stadium will enhance the discipline among Indian cricket audiences then it should be banned for there own good.

Here is What Cricket Experts Have To Say About It

“Cuttack should not be given an international for the next couple of years. As a deterrent, the BCCI must also stop the subsidy to the Odisha Cricket Association. Does the crowd throw valuables when the team does well? When the team does badly, the fans have no business to throw rubbish. “

“Frankly, when it comes to the players’ safety I don’t think there was a very serious threat. But a few people in the stands, they were good (powerful) enough to throw bottles inside the ground, so the umpires thought it was better for the players to go off for a while. The reaction of the crowd… you know we didn’t play well and at times you get reactions like these. It is only the first few bottles, after that they start doing it for fun. I still remember we played in Vizag once and we won the game very easily, that time also a lot of bottles were thrown into the ground.”

What a shame ! When we win all is good when we loosing is that how u behave ? Pl show some respect to your players and respect the game

Just Cuttack not to host matches for a few years…. Not the whole of India… #INDvSA

Some of us had a tough day today too. It happens. Not everything in life always goes your way. Easy to be smug or abusive or pelt bottles!