Cricket is one of those sports where the actions of a captain get all the focus a little slip can cause the team losing the match. While Indian cricket has had the unmatched distinction of witnessing some of the greatest leaders like Kapil Dev, Sourav Ganguly and then MS Dhoni.

Now the team is looking to touch new heights under the leadership of Virat Kohli who has been dominating the India vs South Africa series in the rainbow nation, leading his team to a formidable 3-1 lead.

While Virat Kohli’s leadership can’t be questioned, thanks to the dominating home season as well as the exceptional away performance against the Proteas, it is also true that a good leader has to adjust with the changes around him.

If we compare all the former Indian captains on this parameter than the first name that comes to our mind is MS Dhoni, the two-time World Cup winning skipper and the only captain in the world to win all ICC trophies, namely, the T20 World Cup, ICC Champions Trophy and the ICC World Cup 2011. 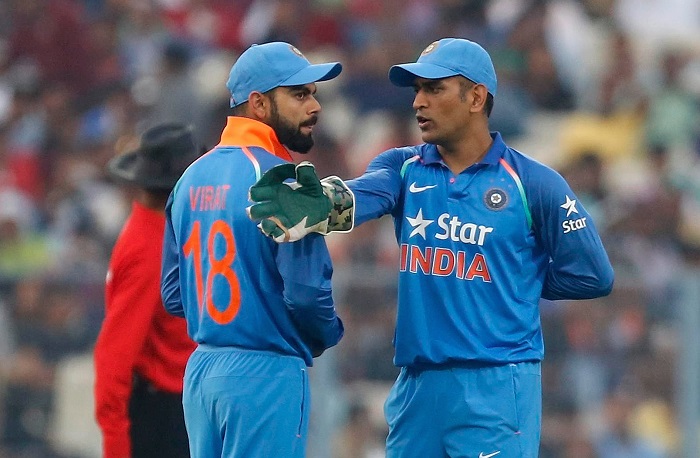 However, apart from his achievement, the one thing that he is well-known for is becoming the best to take a DRS (Decision Reviewing System) call on the field and the same was on display during the India vs South Africa, 4th ODI.

Although Virat Kohli and Rohit Sharma are the official full captain and vice-captain, respectively, of the current squad, MS Dhoni holds the distinction of still being the one who is usually seen taking the DRS call.

It might be his position of a wicket-keeper which gives him the best view of what is happening at the striker’s end, but such is the case with every wicket-keeper and not all of them can take those many right decisions, that too in a flick of a second.

During the India vs South Africa, 4th ODI, Jasprit Bumrah was bowling to Hashim Amla in the 8th over of the innings as on one delivery, the ball went through the space between the batsman’s bat and pad. The whole Indian team, including MS Dhoni and Kohli, got excited while the skipper looked extremely interested for taking a DRS call after the umpire said no. while Virat Kohli quickly consulted his Rohit on the matter, MS Dhoni was the only one who took a stand against going for a call and gave another example of his exceptional cricketing acumen.

Virat Kohli though was convinced that he had heard something and even consulted Rohit about going for the review.

MS Dhoni though quickly signalled to Kohli that there was no bat involved and that they shouldn’t go for a review here.

One can clearly see how Dhoni jumped in the air to make the call more convincing but as soon as it came to opting for DRS, he just clearly advised against it.

MS Dhoni’s almost flawless take on DRS has given him the name of ‘Dhoni Review System’ and last year, even a statistical analysis surfaced which claimed that the Ranchi-born batsman gets 95% of his DRS calls right.