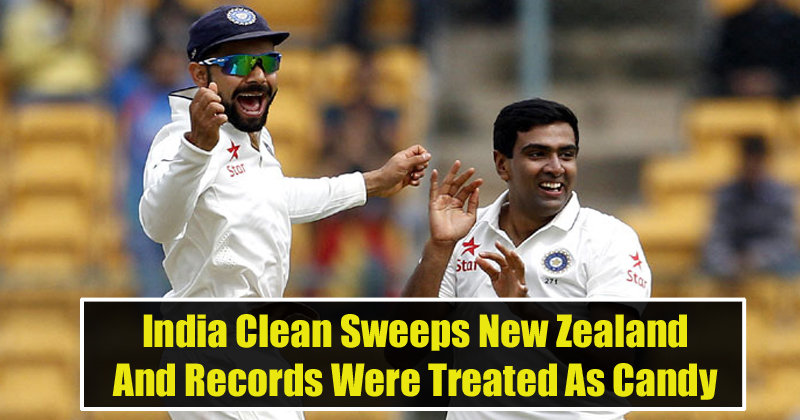 India has won the test series against New Zealand with a clean sweep (3-0). The series have increased the tally of accomplishments for Virat Kohli and his team, both individually and as a team. We got to see some elite performances by the Indian side as  all the players contributed equally in the win and after a long time, we got to see the whole Indian Team performing.

In the bowling department, not much was left for the other bowlers as Ravichandran Ashwin claimed 13 out of the 20 available wickets. But the other bowlers were also able to restraint the kiwis to rotate the strike.

Many records were broken and new ones were made. Here is a tally of some of those records:

1. It was the first time that India registered a clean sweep against New Zealand in test matches.

2. Virat Kohli became the third Indian captain to lead his team to a whitewash of the opponents, Mohammad Azharuddin and MS Dhoni being the others.

4. Virat Kohli made his career best of 211 runs in a test match,his previous record being of 200 runs.

5. Cheteshwar Pujara scored his second best test century in 148 balls, his previous record being scoring hundred in 146 balls. This was also his eighth century, two of them being against New Zealand.

7. Pujara also became the third Indian batsman to register four fifty-plus innings, Mohinder Amarnath and Rahul Dravid being the others.

8. Gautam Gambhir scored the second fastest fifty of his test career and his fourth against New Zealand.