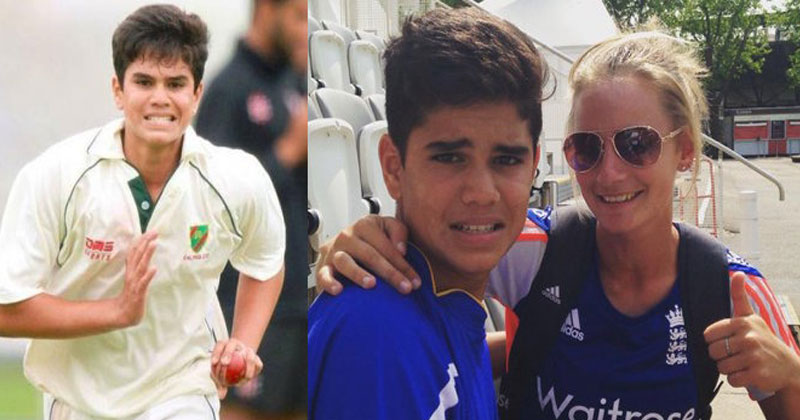 The iconic Lord’s Cricket ground wasn’t the best place for fans who belonged to India on Sunday. However, if you were a fan of English cricket, you couldn’t be happier. That England have defeated India is a news that may be heard loud and clear even at the Christ Redeemer in Brazil.

The thumping triumph that England earned reverberated everywhere whether in India’s Eden Gardens or Kiribati in Africa. The situation was rather simple and uncomplicatedly so. England played better cricket, bowled a tight and disciplined line and their batsmen were on the money.

India did pretty much everything poorly that England did with a sense of panache above all- purpose. However, even in India’s one-sided loss to England, there was one Indian who enjoyed a good outing, it could be said. It was none other than cricket legend Sachin Tendulkar’s son, Arjun Tendulkar.

Not only did Arjun Tendulkar get to bowl quite a lot at the net sessions conducted prior to the start of the Lord’s Test but he also got an opportunity to work around the Lord’s groundsmen.

Interestingly, prior to the start of the 5-day, rain-affected Test Arjun Tendulkar- a passionate left-arm pacer- was also seen bowling to the members of the Indian Women’s team, steaming in hard and bowling to Veda Krishnamurthy. It was a wonderful sight, something one doesn’t get to see all that often.

For instance, let it be asked, how often is it that one sees a net session between a woman and a male cricketer? Probably, not that often, isn’t it? So the incredible sight at Lord’s wasn’t just merely restricted to Arjun Tendulkar getting a real go at the nets, in a Test that produced a sorry state of affairs for Team India.

But one also got to learn about the bond that Arjun Tendulkar shares with destructive English batswoman Danielle Wyatt, amongst the finest openers in the women’s game.

In a light-hearted social media post shared by Ms Wyatt, the belligerent right-hander is seen asking Arjun Tendulkar to ‘push’ and do his groundsman duties well, along with the other Lord’s groundsmen, a solid crew that have cherished a long history in tending to the ground and the pitch in arguably Cricket’s most valuable destination.

It’s also a well-known fact that whenever Arjun Tendulkar is in England, he finds time to practice at the iconic Marylebone Cricket Club- the one and only MCC- in the heart of the United Kingdom.

Of late, the young left-arm bowler has been helping out the Lord’s staff with some of their grounds duties and learning the ropes of the game intricately in close detail and alliance with world-class groundsmen.

Recently, the promising bowling all-rounder also debuted against Sri Lanka, thus appearing in his first-ever Under-19 tournament and impressed everyone immediately with his stellar bowling effort in the tiny island paradise.

That said, there’s hardly a doubt that despite being the son of arguably the most famous cricketer of the modern era, there’s practically no corner that Arjun is not visiting and no stretch of the road he isn’t hitting when it comes to proving himself in the sport. Perhaps, at least, at this point in time, it can be said that there’s a bright future that awaits the Mumbai-based cricketer.