Unless you were born just yesterday or have been living under a rock for a long time, you will likely know about Bruce Lee and his extraordinary exploits. The man was a master Kung Fu practitioner and is widely regarded as an all-time best martial artist, even now. Sadly, Bruce Lee only lived to be 32 as he died from an allergic reaction to the painkiller “Equagesic” in the year 1973. However, when he lived, he made sure that people will always remember him as an immortal legend. These are the 7 World Records Held By Bruce Lee, many of them are still un

If you’ve ever watched any of Bruce Lee’s movies, you won’t even have a single doubt in believing that he was a human with special talents. Bruce Lee’s lightning quick moves, as well as a chiseled frame, might have made some people think that those were some sort of Hollywood special effects taking place when he moved and Kicked-ass on the screen. However, the things he was able to accomplish physically defied several laws of nature and the truth is, there were no special effects. It Was All Real!!

Bruce Lee was born in San Francisco, California in 1940 and became a pioneer of world martial arts revolution, martial arts master, as well as philosopher and the founder of the Jeet Kune Do. Bruce Lee, will always remain the father of MMA (mixed martial arts), and Hollywood’s first Chinese actor.

While Bruce Lee’s martial arts movies broke numerous records, he also has a number of world records on his name that still remain unbeaten and prove that no one can beyond on him yet.

On that note, here are 7 World Records Held By Bruce Lee, The Martial Arts Guinness

1. Bruce Lee is the only human to break a 45 Kg a sandbag by a side kicking.

3. Bruce Lee could punch 9 times in one second while His One-Inch Punch could force a 75kg opponent 5-6 meters away.

4. Lee had punching power of 350 pounds, the same as boxing champion Muhammad Ali but Bruce Lee weighs just 130 pounds in weight, while Ali was double his weight (260 pounds).

Also Read: The Biggest Mysteries About Bruce Lee, The ‘Dragon’

7. Bruce Lee holds the world record for kicking a 135 Kg sand bag to the ceiling which was about 5 meters high.

Bruce Lee’s strength quality has always been preeminent and was greatly praised by several top-level fighters in the sixties. However, how ironical it may sound, his parents nicknamed him “Little Phoenix“.

Bruce Lee was somewhat a superman who could not be defeated and his achievement still leaves many in awe. If you know any other fascinating fact about Bruce Lee and his superpowers, feel free to share them in the comment section below. These were the 7 World Records Held By Bruce Lee, one of the most renowned martial artists of all time. 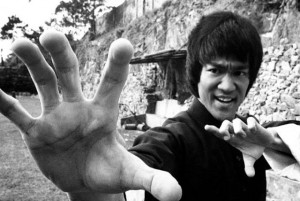