In an age constantly looking for sex symbols and style-icons, there possibly couldn’t have been a more fashionable name other than that of Kim Kardashian.

To some, she’s a charming beauty. To others, besotted with her style-statement and that allure, Kim Kardashian is already an icon of sorts.

How often has it happened that what a celeb wears for an interesting duo or an important date is discussed, debated and critiqued by fans the next day? One might say that’s the usual order of the day. But when it comes to Kim Kardashian, whatever she does; whatever she wears; whenever she decides to shed some clothes in a fashion-shoot- it is all discussed long after a party, duo or event is over.

In that rests her essence and all that she is about.

Regardless of one being a follower or hater in this age defined by ever-changing style statements, Kim Kardashian is an irreplaceable name of sorts. Here’s a truth none can avoid about the buxom beauty.

Whatever Kim Kardashian wears or howsoever she chooses to dress up emerges as the talking point of a generation feeding on popular culture.

That said, there’s hardly a surprise in seeing some of the most talked-about, expensive and trendy outfits worn by Kim Kardashian.

But, which are some of the most stylish outfits worn by Kim Kardashian?

Style and gravitas- they both find in Kim Kardashian some pomp. When this woman steps out, an entire world masquerading as a critic and on other occasions, as a besotted fan pays massive attention.

She set the eyeballs rolling recently when she was out in the streets of L.A., apparently in a bid to enjoy a regular outing with friends and family.

Dressed in knee-length boots and decked in an amiable and comfy jacket, Kim stylishly clubbed the city shorts as they’re called.

And boy, did she bring the house down on fire or what! 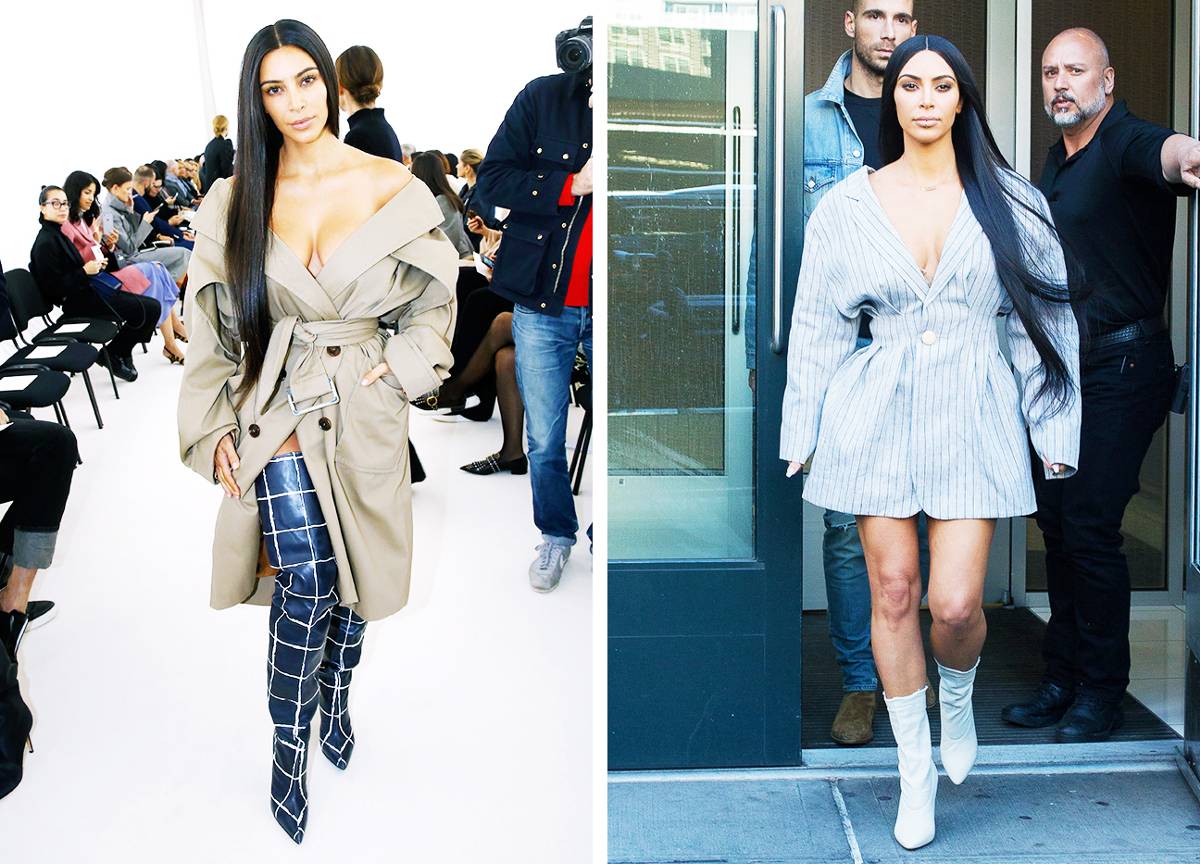 Well here’s a fact that most chicks and dudes would tell you. One doesn’t need to be a fashion icon or an adviser of sorts to know this one.

One can look good and appear stylish only as long as one can carry an outfit. At times, in a desperate bid to stand out from the crowd, one’s seen the way even the most established celebs and renowned faces in media end up messing a duo or soiree.

But not Kim Kardashian. She’s, after all, a different fish in the pond.

One of the most stylish outfits worn by Kim Kardashian includes the oversized one-piece dresses that the LA-born star often ventures out wearing.

She’s actually brought out some of her best looks donning expensive one-piece dresses that often reach about the ankle-length. And must it be said, she puts a massive punch at that. Check it out for yourselves here.

Now, if there truly were a creative celeb who knew just what mishmash to put up with so that it could become a fashion statement of sorts then one won’t have to look beyond Kim Kardashian.

After all, just how many celebrities can actually walk up to a busy street or walk into a parking lot, exit a gym and even turn eyes whilst entering a coffee shop, wearing a combination of cycling shorts and long jackets?

Well, let’s just chill with the fact that not everyone can do what Kim Kardashian can and does every now and again. Here’s some evidence of that. This, by the way, is a regular fashion choice for Kim K.

Dresses wearing which some celebs appear like a question mark if worn or attempted (as a fashion) by Kim Kardashian can truly become an exclamation mark.

If there’s an expression that suffices this particular dress from Kim Kardashian then it can only be a simple albeit honest expression, one often used by Owen Wilson: Wow!

How many women, let alone celebrities would have worn a latex pink mini-dress, the way Kim carried it?

And truth be told, the fashion critics who’ve often made a quick buck or two admitted that Kim Kardashian carried this dress with immense ease, wearing which it was simply impossible for one to walk. 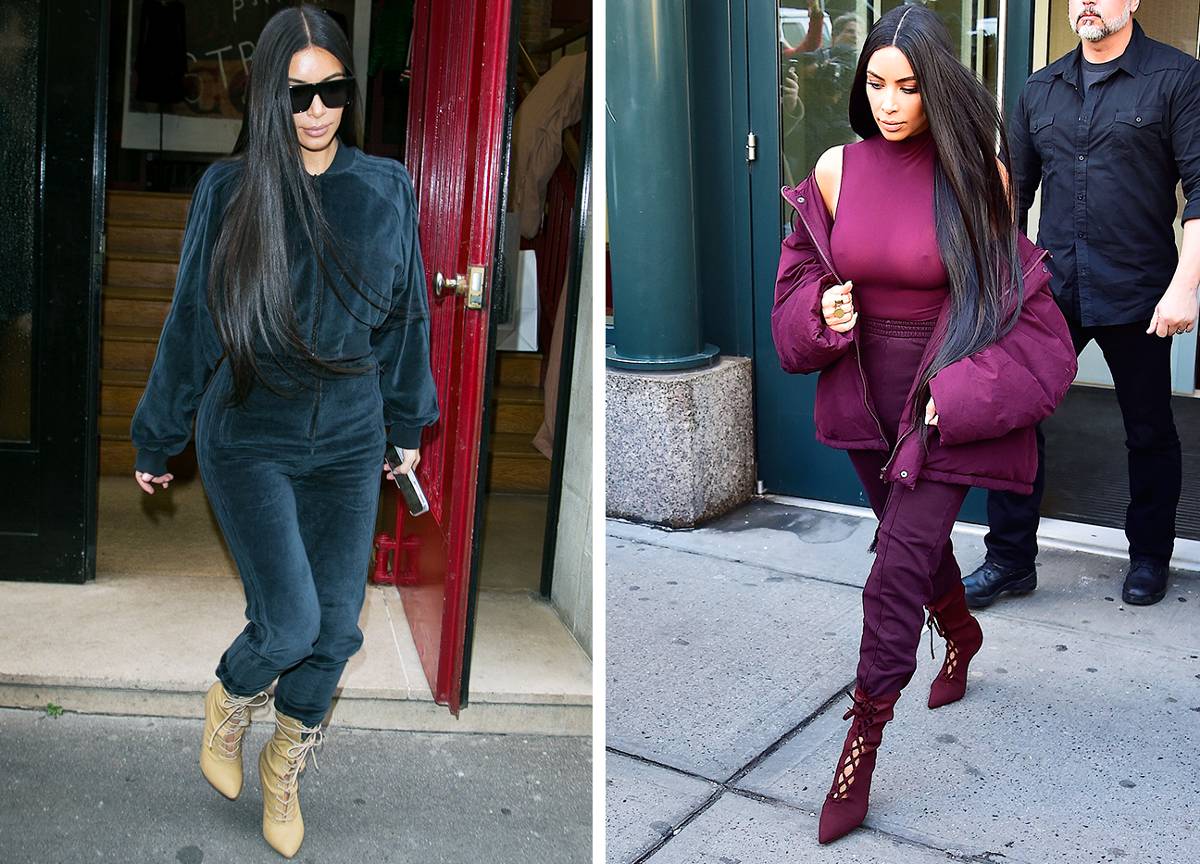 It’s not easy to deny Kim Kardashian her real place or standing in popular culture. Not a day goes by in fashion journals where her tiny waist isn’t written about or where her extravagant life isn’t written about with the same manic excitement with which a Tom Cruise performs those extraordinary stunts in the Mission Impossible ensemble.

In the exact same moment where she’s dressed stylishly makes her look beautiful.

And, interestingly, in the exact same moment where she dolls up as a hottie none can take their eyes off from, she ends up becoming a sex-symbol of sorts.

That said, let’s admit to a fact.

There’s something uncannily enticing about pointed boots and especially when, women, with great hair, step out there wearing them. Isn’t it? What’s your take on that?

Well, whatever it is, keep it safely tucked in; this ain’t a forum for expressing your wildest fantasies that someone like a Kim Kardashian can bring out in rich aplomb.

That said, one of the most stylish outfits worn by Kim Kardashian includes a glitzy popular culture choice. Recently, a noted American fashion bulletin www.whowhatwear.com suggested the following on Kim’s penchant for pointed boots tagged along with tracksuits.

“Not since J.Lo circa the early ’00s have we seen someone being able to pull off this look. The trick to being polished while wearing a tracksuit is making sure it’s the same colour and is tucked into pointed boots.”

An afterthought: While there is hardly a doubt that there happen to be millions of followers of Kim Kardashian and of the same number that increases every day by that number, it suffices to say that every celeb has her own fashion style and statement.

That a noted icon wears something is entirely her own choice. In the maddening pursuit to emulate our favourite people, we often end up towing the line between what looks good and what one would rather avoid. Therefore, in order to look and appear the best one can be, it may be a good practice to takes some notes or inspiration from Kim’s personal sense of style and let one’s own imagination help bring out the best from oneself.

For instance, wearing tracksuits, let alone of a velvet cloth or fabric, may end up looking rather disconcerting or disconsolate for some people. Should that make one blindly ape a celeb? Always the best idea to try what actually looks good on you; think it through!