14 Shocking Facts About Pollution That Will Make You Choke

Home » 14 Shocking Facts About Pollution That Will Make You Choke

Millions of people live their lives and stay unaware of what harm this polluted environment is bringing to them and they are unaware of the shocking facts about pollution. The pollution is becoming an incurable disease and its increasing every day. People are drifting in the hurricane of pollution and it is muddling up the balance of the nature. It is every day’s topic people talk about it and even after taking some strong majors to reduce it, pollution remains the same as we humans keep increasing it.

In India, metro cities are said to be the most polluted cities but the other parts of the world are no better. The water we drink is not entirely safe, 90% of the sound we hear are just noises even the air we breath is mostly polluted. The atmosphere of the Earth is made up of 78% of nitrogen gas, 21% of Oxygen gas and other gases like argon and carbon dioxide. To maintain this balance is essential to all life on Earth and the introduction of various pollutants causes a profound and damaging effect yet we pollute it.

If this information did not shook up your soul these facts from all around the world about pollution will. These facts will open your eyes to the damage that is constantly caused by pollution and will make you realize that we need to save our Planet now than ever.

Here Are 14 Shocking Facts About Pollution That Will Make You Choke:

1. Contaminated water takes the life of a child, every 8 seconds.

2. Length of Polar Bears Penises is getting shrink because of the pollution caused by humans.

3. A study says that, 1 in every 8 deaths are directly or indirectly linked to air pollution.

4. Water-related diseases take the life of 3.4 million people each year.

6. Breathing air in the city Mumbai, India is equivalent to smoking 100 cigarettes.

7. The most polluted and radioactive lake in the world is Lake Karachay located in Russia.

8. 2.5 million plastic bottles thrown by Americans in an hour takes around 500 years to decompose one bottle.

9. New Delhi is the most polluted city in the world.

10. Fishes do lose their sense of smell in polluted lakes.

11. 90% of Chinese cities groundwater is polluted.

12. In the early years of 20th century, Horses use to cause so much pollution with their poop that cars were considered to be a green alternative.

13. More than a million seabirds and 100 million mammals are killed by pollution every year.

14. Lung cancer is caused by air pollution and it also increases the risk for bladder cancer.

15. Breathing a single day in Beijing is same as smoking 21 cigarettes. 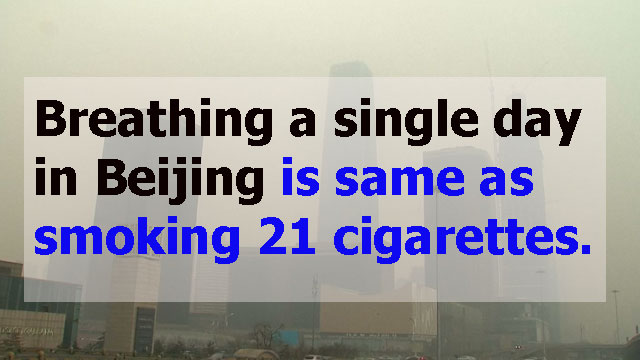