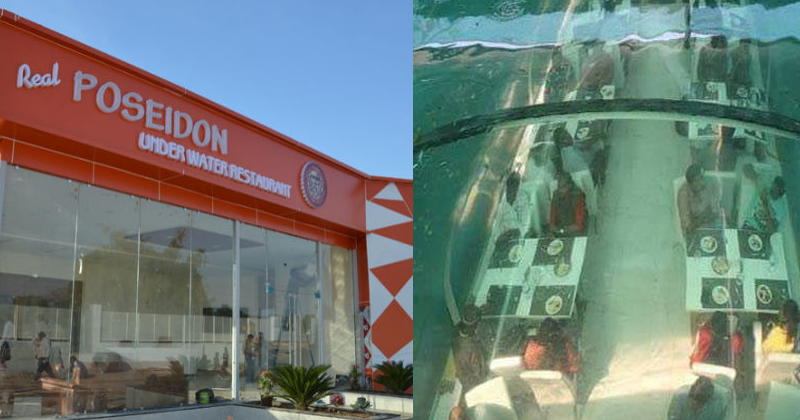 Ahmedabad: On the first day of the second month of the year, India got its first underwater restaurant in Ahmedabad. Named “The Real Poseidon”, the restaurant consists of a dining area which is constructed 20 feet below the ground level.

This one of a kind restaurant has the seating capacity for 32 people at one time. It is covered with a mammoth aquarium from all sides which has 16,000 liters of water.

To reach the dining area, visitors have to take the downward stairs going towards the tunnel that takes you 20 feet down.

Diners can relish their favorite dishes while having the magnificent view of 4,000 species of fishes swimming around, which have been put in the aquarium. Significantly, the restaurant only serves vegetarian food.

“We wanted to do something different and unique for Ahmedabad people. 3-4 years ago, my son gave me this idea. We started working on his idea… initially, our designs were rejected and it took almost 2 years to finalize the design. And now today, we are ready to serve the people,” said Bharat Bhatt the owner of the restaurant.

The restaurant has derived its name from Greek God of Sea – Poseidon. It is situated in the South Bopal area of Ahmedabad city.

Describing the experience of eating under water, a visitor said, “This is really a nice concept. It gives us an illusion that we are sitting and eating somewhere below an ocean”.

To keep the visitors entertained as they enjoy the meal under water, the restaurant owners are also planning to bring in orchestra/band inside.

On the opening day i.e. February 01, the restaurant received over 150 bookings through TV, Radio and Online promotions.

So, is The Poseidon in your next dinning destination list?