Home India This Indian Photographer Won Getty Grant of $10,000 For His End Of... 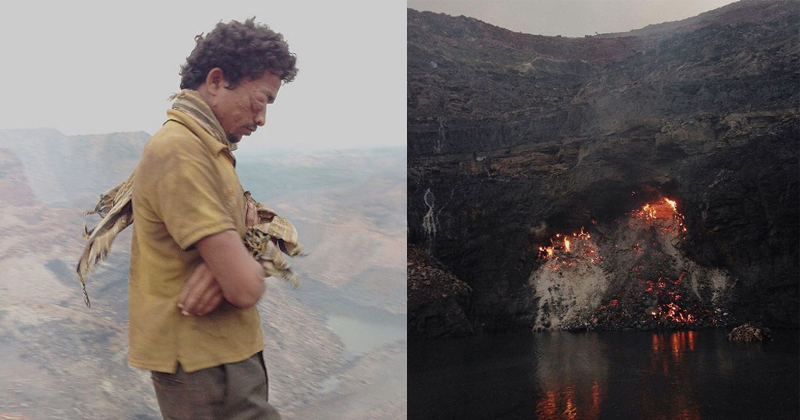 An Indian Photographer, Ronny Sen, is one of the three winners of the second annual Getty Images Instagram grant. The grant which identifies the photographers who document stories from underrepresented communities around the world using Instagram.

His project titled “The End” covers the lives of people living in the town, Jharia in Jharkhand which has been the country’s only reserve of high-quality coal. There are a lot of problems that the people of Jharia have been facing due to living and working in a hazardous place like this.

What does the end of time look like? Jharia was once a green forest. Coal was discovered here in the late 18th century and by the beginning of the 19th century most of India’s mineral resource was mined here. As the imperial government, mercenaries and princely families wrestled for control on distribution, Jharia withstood their greed though eventually became successor to its own suffering. A fire underground has been burning since, but its presence is now overground – inside homes , temples and schools, in churches and mosques- places that were once thriving with life are now consumed by flames. The end of time is manifested with shards and fragments; random, scattered elements of human existence, and a community without a future – plunderers of coal who move from site to site with blasting mines. Survival in an apocalyptic landscape.

Apart from all the harmful greenhouse gases and smoke, the people are living there with fire burning beneath their homes from past 100 years. Various attempts of controlling the fire and the atmosphere of this place have been made by the government, but none of them worked. While many have left the town for their own betterment, some are still living there because their livelihood depends on the coal mines and all they can do is adapt themselves to the surroundings.

The symbol of Indian bureaucracy, the iconic white ambassador car waits inside one of the coal mines in Jharia. Whenever the coal thieves see this car coming they run away from the mines. A photo posted by The End (@whatdoestheendoftimelooklike) on Apr 21, 2016 at 4:25pm PDT

The Instagram account on which the pictures have been posted, is aptly named “whatdoestheendoftimelooklike” as the pictures are nothing short of a resemblance to the post apocalypse time that our world might face someday.

An underground fire has been burning inside these coal mines in Jharia for the last one hundred years.

Sen spent three months in Jharia in 2013-2014 and shot all the pictures and videos through his IPhone 5. The photographer covers each and every aspect of these coal mines and people living in or around them while giving a personal touch to his work through the captions.

Mine officials trying to excavate useable coal from the coal that is burning inside one of the mines in Jharia. A photo posted by The End (@whatdoestheendoftimelooklike) on Apr 21, 2016 at 4:11pm PDT

The other two winners are Girma Berta of Ethiopia and Christian Rodriguez of Uruguay also won the grant.

Coal scavengers work very early in the morning before the mine officials come inside the mines in Jharia.

A coal picker inside one of the coal mines in Jharia. A photo posted by The End (@whatdoestheendoftimelooklike) on Apr 21, 2016 at 4:10pm PDT