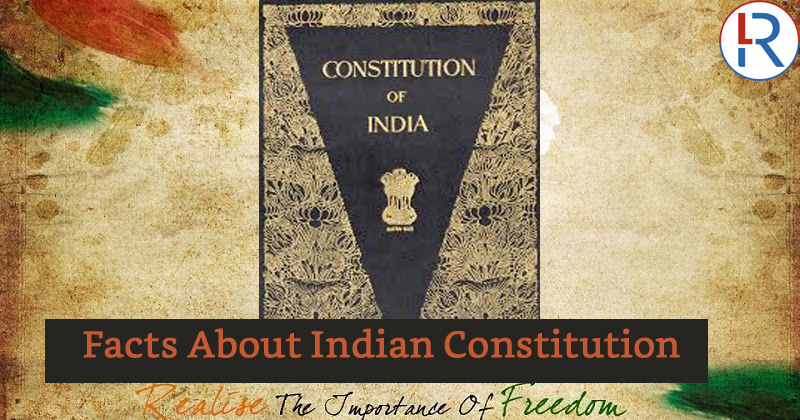 Indian samvidhan was created after India got its much awaited independence on 15 August 1947. And it took great efforts from our patriotic leaders to create the world’s largest written constitution for the nation. The constituent assembly was created under the Chairmanship of Dr. B.R. Ambedkar and Presidential powers with Dr. Rajendra Prasad. It took 2 years, 11 months and 18 days before adopting the Constitution. The constitution of India was signed by 284 members of the assembly on 24 January 1950.

It was then on 26th January 1950, when India got the pride to be a republican nation with its Indian samvidhan into existence. Since then, one of the evident facts about Indian constitution is that it has undergone various amendments during the journey of democracy over 6 decades.

Let’s dwell into some of the facts about Indian constitution to know it better. Some of them are fascinating and some are truly amazing.

1. The most startling of facts about Indian constitution is that it was a hand written document, with 48 articles, 12 schedules and 94 amendments. Now just that, it was written using beautiful calligraphy by Prem Behari Narain Raizada. The pages were also decorated by artists from Shantiniketan.

2. The Constitution of India serves as the supreme law of India. This is the foundation for establishes the structure, procedures, powers and duties of government institutions. It clearly sets out fundamental rights, directive principles and the duties of citizens.

3. The constitution of India was signed in two languages – Hindi and English. The signing happened while it was heavily raining. This was considered as a good omen by all the assembly members who had gathered together to sign the final copy of the constitution.

4. The signing of constitution was done by 284 members of the Constituent Assembly. This included 15 women. What an absolute example of women empowerment from the time of Independence!

5. The original copies of Indian Constitution are preserved in special helium-filled cases in the Library of the Parliament of India.

6. The draft was prepared after putting great thought. When it was presented for debate and discussion, there were more than 2000 amendments made to it before finalizing.

7. 26 January 1950 became the Republic Day of India. But the drafting of the Constitution was complete exactly two months before this day, i.e. on 26th November, 1949.

8. 26th January has special significance in Indian history. It was on this day Indian congress seeded the fight for complete Independence. Also the Indian national flag was hoisted for the first time on this date. Being the anniversary of “Purna Swaraj”, it was consciously chosen to amend the constitution as well.

9. Dr. B.R. Ambedkar was the Chairman of the constitution committee. He was also the first law minister of free India, a jurist, an economist, and a social reformer. He can definitely be honored as “Father of Indian Constitution”.

The Indian national flag, with tri-color and the chakra in the middle, was conceptualized by Pingali Venkayya, a farmer from Machilipatnam (a city in southern state of Andhra Pradesh).

12. Despite numerous amendments, the significant objectives persist in integrity – liberty, equality, fraternity, diversity and so on. The Constitution continues to address duties of individuals and responsibility of the state to distribute resources to serve the common good.

After knowing these constitution facts about Indian constitution, I was overwhelmed with the feeling of tribute and salute to those who committed to the nation with complete dedication. It’s time for every citizen of India, and human life in existence on this earth to take the same responsibility of building nations.