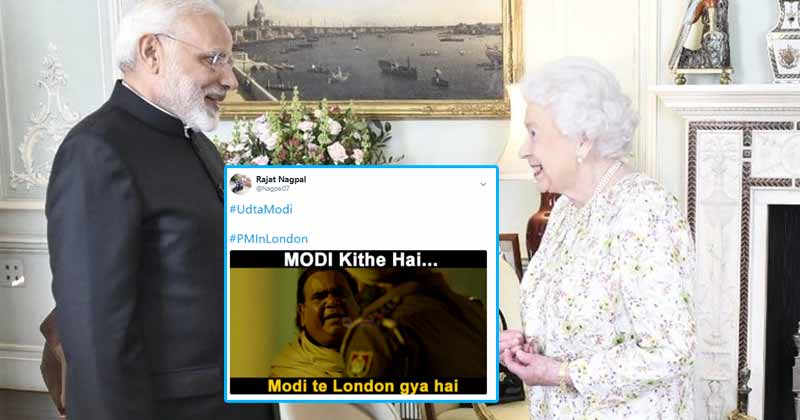 Whenever India comes across Britain there’s another sense of connection the two feel between each other, the same is felt by the people of these countries. This happens due to the history both of the countries share with each other. PM Narendra Modi is currently on his U.K. tour to engage in talks about international relations and attend the Commonwealth Heads of Government Meeting.

And so Prime Minister Narendra Modi met Queen Elizabeth, like every other leader of any country. Much like other times, there were a lot of pictures being taken and salutation being exchanged.

As a result, various images from the meeting ended up on the Internet and we all know what is bound to happen in instances like these. They’re immediately transformed into a meme with some of the hilarious captions aiding them.

Here are some of the best ones from their meeting.

The look on the Queen's face is as if Modi said "Your Majesty, you may return the Kohinoor, or… mandir yehin banayenge"

Q: how dare you call my name, honour me by calling ‘Your Majesty’

M: you see, I have a friend called Amit Shah

Queen : we invaded half the countries of the world

Modi : Queen please, I have travelled more than that. pic.twitter.com/UAvSKKcN7r

Queen Elizabeth is the only one who can compare Nehru and Modi based on her personal experiences. She could contribute to one of desi twitter’s favourite subjects.

No bhakts have tried to shame Queen Elizabeth for the dress that she wore while she met MadEye Modi. Progress. #AccheDin

91 years old Queen Elizabeth watches in dispair as PM Modi conveys his inability to grant her wish of admission in JNU, as she still falls short by 3 years to meet the minimum age criteria for entry in institute (2018) pic.twitter.com/hbz2cozQAr

After looking at memes and instances like these, the first question that pops into our heads is how can someone think in this way?

Anyways, this is Modi’s second meeting with the Queen and that too less than in three years. He last met her in November 2015.

Modi will attend this year’s Commonwealth Heads of Government Meeting (CHOGM) meeting in Britain on Thursday and Friday, becoming the first Indian Prime Minister to attend the biannual event since 2009. With the Commonwealth losing its relevance in an increasingly multipolar world, efforts are on to reinvigorate this grouping of 53 former British colonies through this meeting.