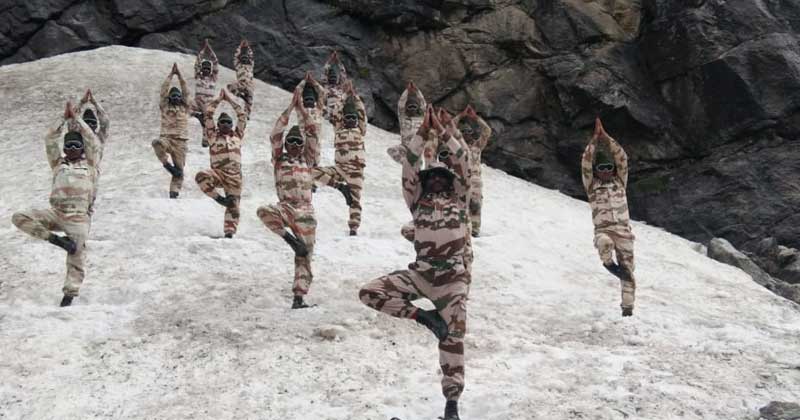 World Yoga Day is observed on June 21st every year and because India is the birthplace of yoga, our country celebrates this day like nothing else. Each and everyone on social media is putting out their contribution to the celebration and it all looks so great. These celebratory yoga posts for world yoga day seem to be some kind of contribution to a big party for which everyone is happy to attend.

While some came together to do yoga in the morning, places like Rajasthan broke the world record of a maximum number of people doing yoga this year.

As amazing as it all sounds, yoga is not at all easy. It requires a great deal of patience, practice and perseverance, along with all that, it needs a level of comfort to carry out the yoga asanas. But that’s not that big of a problem for the Indo-Tibetan Border Police, also known as ITBP.

The Indo-Tibetan Border Police jawans posted pictures and videos of them doing yoga in some of the most extreme conditions on the planet. From snowy mountains at 13,000 feet above the sea level to the deep waters, to even in the air, these Indian jawans have almost done the impossible, once again.

Here are few clips and photographs of the Himveers doing Surya Namaskar against snow-capped mountains.

Another group of ITBP soldiers did their bid for the World Yoga Day by doing something like ‘River Yoga’ since the place they’re posted in, is a river. They are currently posted in Arunachal Pradesh’s Lohitpur in Digaru river.

In addition to these ITBP soldiers, Indian Air Force did the impossible by doing yoga in the sky, after jumping from a plane. Yes, you read that exactly right. The Instructors of Paratroopers Training School of the India Air Force shared pictures of them doing Yoga in the blue sky, unbelievable, right?

Akash Saini -
Whether in a museum, amusement park, or film, dinosaurs are always an attraction. Fossils and footprints have revealed a lot about the...