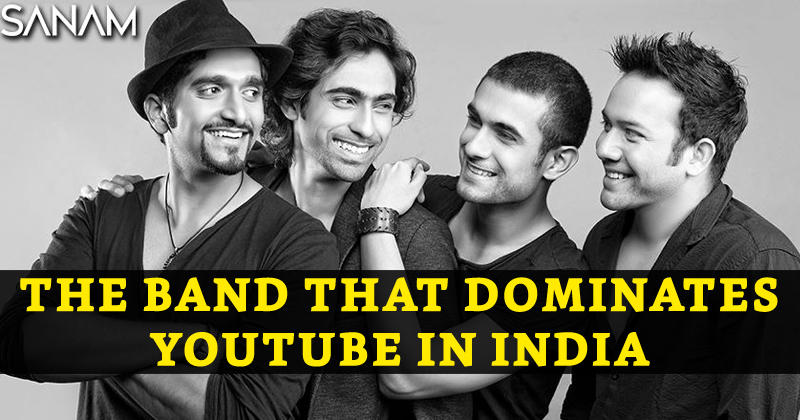 Sanam, one of India’s most renowned band consisting of four talented singer-musicians, Sanam Puri (lead vocalist), Venky S (bass guitar and vocals), Samar Puri (lead guitarist and vocals) and Keshav Dhanraj (drums and vocals), is on the roll these days and the fame that they have achieved, is the result of just three years of hard work as well as the brilliance they seem to have born with.

The four piece band brings along the breath of fresh air and give new life to old classics that are already one of a kind songs. Although, Sanam do have their share of own songs that have been mesmerizing the fans, but their recreated versions of classics are the most loved ones on YouTube.

The voice that every member of ‘Sanam’ brings to their songs along with quirky music arrangement tends to take you to beautiful places, without giving away the magic of the original number. On this note, here are the Top 5 All Time Classics Reinvented By Sanam.

This is a song that has, time and time again, been reinvented or recreated by uncountable artists but Sanam has given a playful twist to this RD Burman and Mohammad Rafi classic.

Imagine a rock band performing this song on a stage, in front of a young crowd that has been forced to groove on this emotional track. That is what Sanam has done with this Kishore Kumar number and man, opting the contemporary style with those best that are backed by the base guitar, it definitely is one of the finest recreations of this song.

Raja Mehdi Ali Khan’s lyrics, music composed by Madan Mohan and voice of The Nightingale of Bollywood, Lata Mangeshkar, the song Lag Jaa Gale is still one of the most hauntingly mesmerizing tracks that completely expresses the feeling of longingness. Saman has turned this into a perfect romantic-evening song and since it is the male version, we now have the opportunity to feel the craving of a male lover too.

One of R. D. Burman‘s best compositions, Javed Akhtar‘s lyrical magic, and Kumar Sanu’s voice, Ek Ladki Ko Dekha is one of our personal favorites. While the original version had slow beats and the focus was on the feeling that it endowed, Sanam’s recreation perfectly sums up the modern era love-at-first-sight feel. The song is picturized in a scenic location and this revamped classic instantly captures your hearts. Sanam has even included a beautiful acoustic touch to it.

R.D Burman’s music and Kishore Kumar’s voice, O Mere Dil Ke Chain was a song for all the lovers from the 70’s as it completely did justice with the feeling of finding one’s true love and expressing it in the most serene way possible. It was, still is and always will be an all time classic but Sanam’s recreated versions had added more youth to the song and we have never expected it to turn out this good.

While R.D Burman ruled the 80’s, it was his father’s, S.D Burman, music that brought Indian music into the limelight in the 60’s. One such composition from the Sr. Burman was Apna Dil To Awara, which was sung by national award winner Hemant Kumar. While the original song was picturised as a romantic train journey where the actor finds the love of his life, Sanam’s has turned it into a song for every bachelor trip of the modern era.

We just can’t get over these fantastic renditions by Sanam and What About You? Share your thoughts in the comment sections below.

Jyotsna Amla -
If there is one thing that unites everyone from different sectors of life, religion and gender then it has to be festivals....