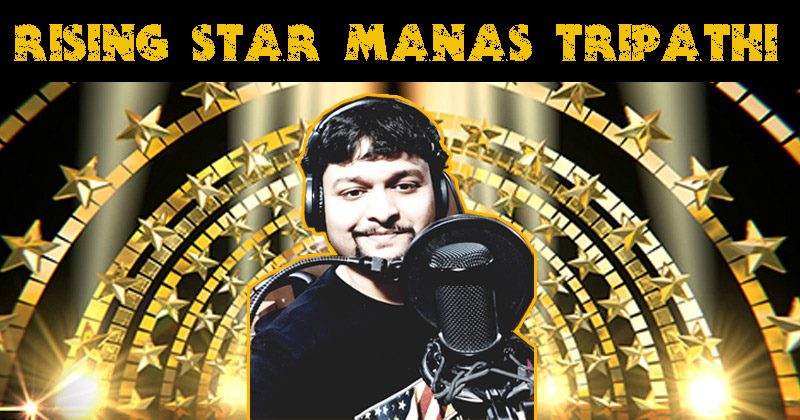 There are very few people who decide to pursue their passion. Then, there are fewer who decide that after turning 30. But, only a fraction of people, prove that the riper the fruit, the sweeter it is. We are glad to introduce you to such a personality, who not only pursued his passion but is also one of the sweetest voices we have recently heard. His dedication to singing is inherent and even after a successful career as a consultant, he could not forgo singing. It is like his genetic inheritance that became his calling. The owner of this melodious voice and the Rising Star is none other than, Manas Tripathi, who recently made himself a home in many hearts with his voice.

We recently got a chance to speak to him about his life, his work, and his love for music. He has a loving personality, a ton of passion, and a melodious voice which he has ameliorated with rigorous practice. With all humility, he gives the credit to his mother, wife, and his friends. Let’s talk to him about what it takes for a person to realize his goals.

We asked Manas Tripathi a few questions trying to get the inspiration from him and he was generous.

“When did you realize that you have such a talent?”

Manas Tripathi: “I started singing at a very young age. I remember I won my first singing competition in the 3rd standard at my school. After that, I was a regular feature of my junior school singing team and got an opportunity to perform a solo patriotic song in front of my entire school (St. Joseph’s College) while I was still in the fifth standard. I continued to sing and perform in school competitions, functions but the realization that it is more than a hobby started to happen during B.Tech when I started winning almost all the local competitions I participated in. However, things were running at their own pace and although I could not pursue music professionally, I continued singing and participating in office functions/competitions that came my way.”

Suggested Read: Why Anurag Sinha Is An Actor You Don’t Meet Everyday But Wished You Did?

“Most of the singers start early, do you think you are late pursuing singing?”

Manas: “I would say ‘Morning is when you wake up’ ” laughs wholeheartedly. “I did start early but it is just now that I have started coming into my own elements. I would say it is never too late for anything in life if you pursue it with passion and conviction. I am in a very good head space right now and am loving the work I am able to do.” We do too.

“A journey for an artist is always filled with some tough moments, would you like to share any of them?”

Manas: “I would say my journey so far has been extremely enriching. I am learning something each day which I think is the best thing that can happen to any artist. But it would not be fair to say that I have not faced tough moments. It would be interesting to know that I tried in auditions for reality shows only to get rejected in the first round itself. I did feel bad but it made me realize that I needed to work on myself.” Fortune favours the Brave.

“Who is your pillar of support?”

Manas: “My family, both immediate and extended, and friends are my pillars. My mother, who is a single parent, is the strongest human being I know. She is a true fighter and has given me the virtues that make me the individual I am today. Then my lady love, my better half, who by the way is my biggest critic too. She gives me the space I need to work on my craft and provides support that is truly never-ending. My son, who is almost 5 now, sits and joins me in my practice sessions. And last but by no means least my friends who eagerly wait for my releases and suggest songs that they think would suit my voice.”

“We heard that recently a major music composer tweeted about your voice, would you like to share the experience?”

Manas: “I would like to correct this a bit, I tweeted him my work and he responded with a like to my tweet which, by no means, is a small feat for me. I was thrilled to bits to see it. Can’t thank him enough for his gesture. Appreciation and recognition are what artists feed off and I think this will push me to better myself and produce music that resonates with one and all.” Manas Tripathi was humble and extremely thankful about it but we all know that if an expert likes your work, you are doing it right. Just, carry on.

“What is your next big plan? Are you looking towards payback or albums?”

Manas: “Getting an opportunity for playback would be like a dream coming true and I pray that it happens soon. Fingers crossed!!. For immediate plans, I am already working on my next cover which will be released on my YouTube channel by the end of this month. In addition, planning for my first original is also underway. We have a basic idea as to what we want to do and we are beginning to put the pieces like lyrics, track, etc. Together.”

“What would you like to say to the people who have heard your songs and appreciated your voice?”

Manas: “I will start by saying a BIG THANK YOU. I am truly humbled with all the appreciation I have got so far and would urge you all to keep listening, liking, and sharing my work. There is a lot more coming so please stay tuned and keep motivating.”

Well, in all honesty, you are the one who has motivated us to pursue our passion and we thank you for that.

Here is Manas Tripathi’s new song for you.