Home Entertainment Planning for a movie outing? Here are all the movies releasing in... 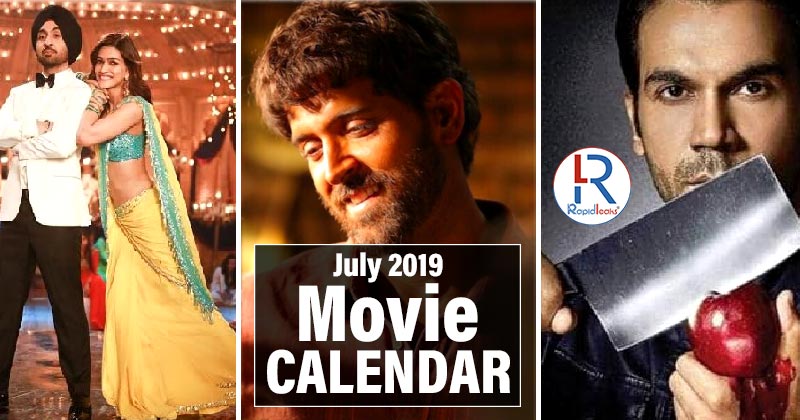 Movies in India are lesser a source of entertainment and more of a way of celebrating life. People worship stars and their work like anything, as in which other country has been playing the same movie for 22 years now? Which country’s people gathered outside the hospital when a dear actor was admitted after an accident? Things like these happen only in India and with Indian movie actors.

Now, if you’re someone who considers themselves to a film fanatic and is a sucker for good content then you should be knowing about all the movies releasing in July 2019.

There are a total of 5 major releases slated for the month of July and each one is gathering the audience’s interest for different reasons. Sounds exciting? Then keep on reading about all the movies releasing in July 2019 and tell us which one are you most excited for.

The very first release of July is Malaal from Bhansali films and it has two kids from families that have been a part of the Hindi film industry for a long time now. Javed Jaffrey’s son Meezaan Jaffrey and Sanjay Leela Bhansali’s niece Sharmin Segal are making their Bollywood debut with Malaal which is a love story about two people who are very different from each other and yet fall in love.

Super 30 is one of the most anticipated films of 2019 which is why it’s on our list of big movies releasing in July 2019. Super 30 is based on a real-life story of award-winning Mathematician Anand Kumar and his program ‘Super 30’ under which he coaches 30 underprivileged kids and trains them for some of India’s toughest entrance examinations – IIT. This is Hrithik Roshan’s first release in the last two years which is a long time for an actor and star-like Hrithik and his fans. The film stars actors like Pankaj Tripathi, Mrunal Thakur, Amit Sadh, Virendra Saxena and Nandish Singh among others.

Lion King is probably one of everyone’s favourite Disney movies of all time. It has a great story, great character and great music to top it all off. So, when the news of Disney reviving their classic family drama came out, everyone immediately marked the date on their calendar. The Lion King is officially out on 19th July which makes it another one of the movies releasing in July 2019. You can either go for the original one with Beyonce, Donald Glover, Seth Rogan and Jamie Oliver, or for the Hindi version for which Shahrukh Khan, Aaryan Khan and other great actors from Bollywood have given their voice. The Lion King is releasing in Hindi, English, Tamil and Telugu.

If you’re a Diljit Dosanjh fan then this is going to be an epic treat for you, since this would be Dosanjh’s first pure comedy in Bollywood. Along with Dosanjh, Arjun Patiala also has Kriti Sanon and Varun Sharma in integral roles. The film is directed by Rohit Jugraj and it has Sanon playing the role of a crime reporter and Dosanjh and Sharma are seen as policemen. The trailer is as quirky as the characters and the actors in it which makes it a must-see for everyone looking for a good laugh.

Another one of the most-talked-about movies of this year is Kangana Ranaut and Rajkumar Rao’s Judgementall Hai Kya. If you’re a fan of any of these two then you need to be there in the cinemas for this one of the movies releasing July 2019. The trailer of the movie was dropped very recently and it gave us a perfect peek into this crazy mystery-drama. The movie is about a murder and its two prime suspects, Kangana and Rajkummar who will be fighting each other in order to prove themselves innocent.

These are all the amazing movies releasing in July 2019 that are from different genres which means there is something for everything this month. Which one are you most excited about? Let us know in the comments section below.