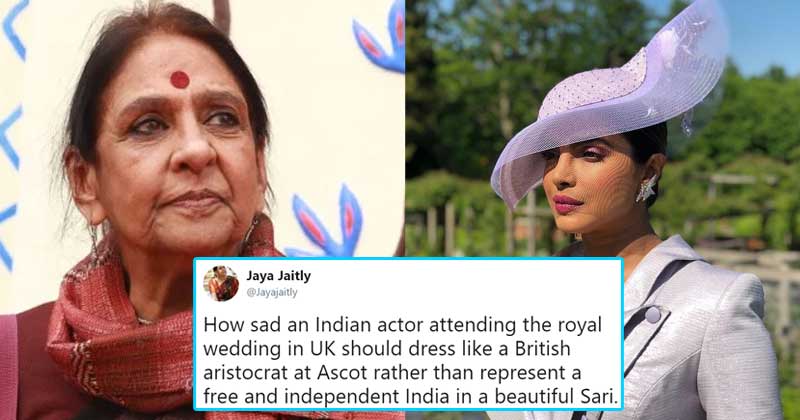 The Internet is such a great place. It offers one an unlimited amount of information and knowledge about everything in the world, without going anywhere. It has also provided a platform where people can say whatever they want and pinpointers at whoever they want, all within the comfort of their home and place.

It has also offered one a place to ask mindless and unnecessary questions about each and everything that a public figure does, especially celebrities.

So, Priyanka Chopra looked absolutely stunning at the Royal wedding and no one can really question that statement. She wore Vivienne Westwood and graced the wedding with her poised and charming self. And, while the world adored her outfit choice and her overall, Jaya Jaitly from India thought she should have gone with something else, something more Indian because well she’s Indian and a global star, not a person who can decide for whatever they want to wear.

Jaya Jaitly, former Samata Party president, an activist, author and Indian handicrafts curator, criticised Priyanka Chopra for choosing to wear ‘British aristocrat’ attire and not a traditional Indian saree at the Royal Wedding. Her remark over Priyanka’s outfit was stark and definitely not in the good light.

How sad an Indian actor attending the royal wedding in UK should dress like a British aristocrat at Ascot rather than represent a free and independent India in a beautiful Sari. pic.twitter.com/zXF9zpCbMq

Jaitly needs to know and understand that each and every place has some rules and it’s mandatory for every Royal Wedding’s female guest to come sporting a day-dress and a hat. Along with that, anyone can wear whatever they want to, Priyanka was not invited to the wedding to represent the country but as a friend and it’s her decision to wear whatever she wants. There are many on Twitter who totally agree with what we said and have reacted in a similar way to Jaya Jaitly’s remarks. Check them out here:

Completely unfair criticism of a woman who has done enough and more to put India on the World Map. If she is creating an international image for herself, how is that sad? She isn’t doing anything dishonourable. Would you ask why Modi doesn’t go touring in Kurta pyjama?

Clearly not a free India if she’s not free to wear what she wants & have people judge her choice. Let’s not make everything an issue when it doesn’t need to be! #unfaircriticism

Absolutely not necessary madam. One must dress according to the place and time. When foreigners attend Hindu weddings, I've often seen them adorn sarees / jippas. Likewise, what's wrong in dressing for their occasion? https://t.co/JZVi0QE9Nj

The woman can't even attend a friend's wedding without being criticised for her sartorial choices! She was there in her personal capacity, not as a representative of 'India'. I never saw Indian men being criticised for wearing a suit on an international platform! https://t.co/yBi40kUfmX

Why did you want her to do? Wear a saree and dance on Rangeelo Maro Dholna? There are dress codes for royal weddings aunty. Not ever event is an opportunity to make a statement about your "culture" https://t.co/o9M5KrqjeV

Firstly, there is a dress code and secondly she doesn't have to represent India wherever she goes https://t.co/Cyf5Kgle7X

How sad an Indian citizen using a language that was imposed by Britishers on us rather than represent our free and Independent India in our local languages. https://t.co/czl0sEMmRq

She was the only indian in #RoyalWedding2018 I guess , you should be proud of her but aunties like you only criticize.

she is not there to represent, she's attending her friend's wedding. make your daughter wear saari. actually don't. let her wear whatever she wants

I do not think anybody asked her to represent Hindustan @priyankachopra

She is not representing India but on her own .should be free to wear what she likes.

How does wearing saree make you more of an Indian? What a wasteful argument.. Women like you makes it difficult for other women to flourish because the only weapon weapon is saree & sanskaar…
intellect, independent, empowered is the new attire, not saree!!!

Stop dictating to people what they should bear. Why are the Chinese bearing suit and tie, don't they have a five thousand year old culture?

Have no sympathy for PC, dont care two hoots about her,…

But this tirade is uncalled for.
She is free wear anything as she pleases and deems fit!!

Public figures need to understand that each and everything that they say has repercussions, which is why they should see the good in people rather than finding flaws in each and everyone around them.