Canadian Prime Minister Justin Trudeau and family are in India for their week-long visit to the country, at the invitation of Prime Minister Narendra Modi. 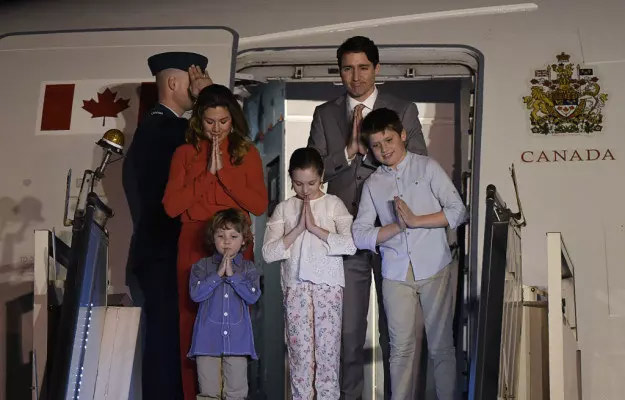 Since landing in India on February 17, the family has visited Taj Mahal in Agra, Golden Temple in Amritsar and Sabarmati Ashram in Gujarat, till now. But yesterday they met with a whole lot of Bollywood and top Business leaders in the country, in Mumbai. The event was filled with some of the most influential names in the entertainment industry, all posing right next to Canadian Prime Minister.

Almost all those who met and posed with the leader went on to post about it on their social media, however, only one man was able to crash to Trudeau’s social media. None other than SRK, the Badshah of Bollywood made it to Trudeau’s twitter. Along with the picture, Trudeau also tweeted, “Tonight, we celebrated stronger ties & new co-production opportunities between Bollywood and the Canadian Film Industry. And who better to help than @iamsrk himself… Great to meet you!”

Tonight, we celebrated stronger ties & new co-production opportunities between Bollywood and the Canadian Film Industry. And who better to help than @iamsrk himself… Great to meet you! 🇮🇳🇨🇦 pic.twitter.com/1OcwsA9lMS

While Trudeau opted for a gold sherwani, almost perfect for a groom on his D-day, Sophie (his wife) went with an off-white saree which looked stunning to be precise. The Trudeau kids also wore traditional Indian outfits, including kurta-pajama for Xavier and lehenga for daughter Ella. Hadrien, the youngest from the lot was missing from the pictures.

To be real, Justin Trudeau and family, looked like just another bunch of firangs visiting India for the first time, totally thinking of it being similar to all the usual glam shown in Bollywood movies. Alert, we don’t dress like this every day, or even on every function, just on weddings.

Speaking about his visit, Trudeau had earlier told a leading daily, “One of the things that I really wanted to show to my kids is the extraordinary diversity of India, being able to go to a mandir, to Golden Temple, to a mosque and then to other places, this highlights the diversity and pluralism of India which isn’t without its challenges.”