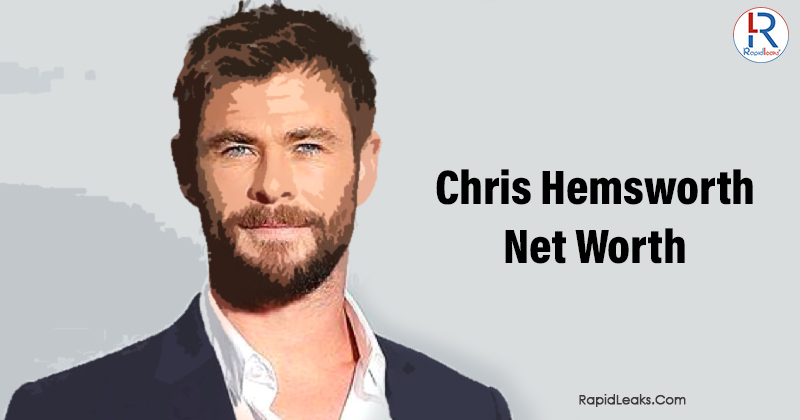 Christopher ‘Chris’ Hemsworth’s net worth as of 2019 is $90 million. He was born on the 11th of August, 1983 in Melbourne, Australia. He is a famous Hollywood actor known worldwide for playing the role of ‘Thor’ in the Marvel Cinematic Universe.

Chris Hemsworth is an Australian actor born and brought up in Melbourne. He came to the limelight by playing the role of Kim Hyde in the Australian TV series ‘Home and Away’. His famous projects in Hollywood are ‘Star Trek’ (2009), ‘A Perfect Getaway’ (2009), ‘Snow White and the Huntsman’ (2012) and many more. However, this Australian heartthrob made his way into the hearts of his fans by playing the role of ‘Thor’ in the Marvel Cinematic Universe. His worth as of 2019 is $90 million dollars.

Chris Hemsworth was born to Leonie and Craig Hemsworth, an English teacher and a social services counselor respectively. The middle one the famous ‘Hemsworth Bros Trio’ and the other two being Luke and Liam Hemsworth, both also actors. He has English, German, Irish and Scottish ancestry.

The actor started his career by working in an Australian television series. He made his way into the American silver screen by playing the role of ‘George Kirk’ in the movie Star Trek. Though his role was small, it was enough to get him noticed for more Hollywood projects. He went to star in movies like ‘Red Dawn’, ‘Snow White and the Huntsman’, ‘The Cabin in the Woods’ and several more.

The breakthrough in his career came when he played the role of ‘Thor’, the thunder god in the MCU. This tall and well built man left his mark on the viewers when they watched him swing the hammer in the movie. He went to be a part of ‘Avengers’, the prime movie of the MCU which went on to become the biggest blockbuster hit and the third highest grossing movie worldwide in the year 2012. Ever since that, he has acted in Thor sequels and Avengers sequels. He was named as the ‘Sexiest Man Alive’ in the year 2014.

Following are some of the best highlights in Chris Hemsworth’s career:

With almost everything we know about Chris Hemsworth, there are few lessons we can learn from his life story:

Chris undoubtedly had to work in many projects before landing in Hollywood. With such an amazing figure and one of America’s heartthrobs, he hasn’t let his success go to his head. He still works out to maintain his physique and he can be seen being fun on the many of his movie sets.
Perfect success is the mix of these three. Working hard, laughing more and keeping ourselves grounded is important to achieve it.

Creating your own legacy.

Hemsworth has truly made his way into the hearts of his fans. There will never be another Thor like him. His connect with the audience is so strong that just by his name people associate him with Marvel’s thunder god. And by working hard and having fun along the way, one can surely create his own legacy.

The perfect balance between work and family.
Chris is seen as a doting father and a proud husband who spends most of his time with his kids. He is often seen doing cute little things like baking a dinosaur cake for his daughter’s birthday because the bakery refused to. A complete family man who gives his 100% even when he is working.

Chris Hemsworth is an Australian/American heartthrob who is best known by playing Marvel Comics’ superhero. He gained acclaim worldwide due to his character in the movie ‘Thor’ and its sequels. He is married to Elsa Pataky, a Spanish actress in the year 2010 with whom he has 3 children – India Rose, Sasha and Tristan. His net worth as of 2019 is $90 million dollars.