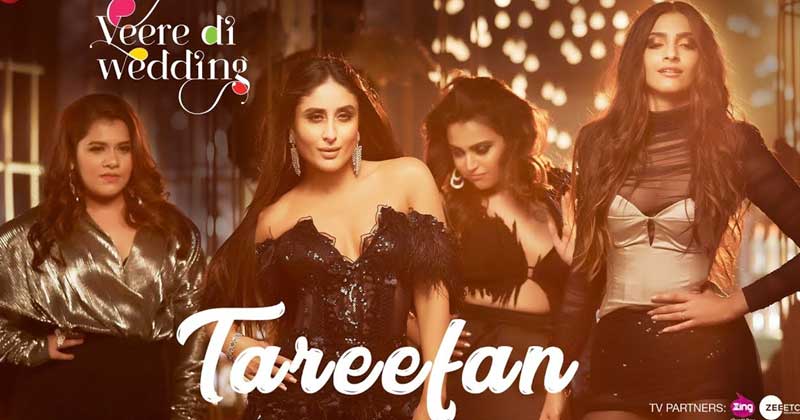 How many times have you seen random women just crawling up to men in music videos in a club or some other setting? The basic premise of the song doesn’t even matter, but this certain scenario would be in each and every one of those party, clubbing or basically any other music video. All to encourage the male gaze and make the video hit among them.

However, the makers of ‘Tareefan’, the first song of ‘Veere Di Wedding’, have decided to do something completely opposite of this.

Sonam Kapoor and Kareena Kapoor turn Boss Ladies for this song and groove with an ample amount of eye candies around them. From the bedroom scenes to the club one, or even the one from the bar, each and every scene barrages a spotlight on the women and only the women of this movie, with some really handsome and well-toned men around them.

The role reversing in the music video is not only amazing but also refreshing, considering nothing like this has ever been made for the Indian audience, something that stands true for the movie too.

Apart from that, let’s just a give a moment to how amazing the women look in this music video. All four of the leading ladies, Kareena Kapoor Khan, Sonam Kapoor, Swara Bhaskar and Shikha Talsania just look drop-dead gorgeous with their outfits, makeup, jewellery, especially with the attitude that they carry.

‘Tareefan’ is sung by Badshah, while the music has been given by Qaran. The lyrics of the song are penned by QARAN, Rupin Pahwa & Badshah. ‘Veere Di Wedding’ is produced by Ekta Kapoor and Rhea Kapoor and directed by Shashanka Ghosh.

The song is conceptualised, directed and choreographed by Farah Khan who is too choosy with her projects these days. While talking about this song with the media, Farah said, “This is the second music video that I have conceptualised after Bluffmaster’s Ek Main Aur Ek Tu Hai. We’ve taken this song to the next level. The concept of a gender swap really appealed to me, so we made the boys the decorative pieces in the song, with the girls being the heroes. It was fun working with some truly empowered and enlightened women like Rhea (Kapoor), Ekta (Kapoor), Kareena, Sonam, Swara, and Shikha.”