Home Entertainment Bollywood Salman Khan And His 7 Girlfriends: Know Him More On His Birthday 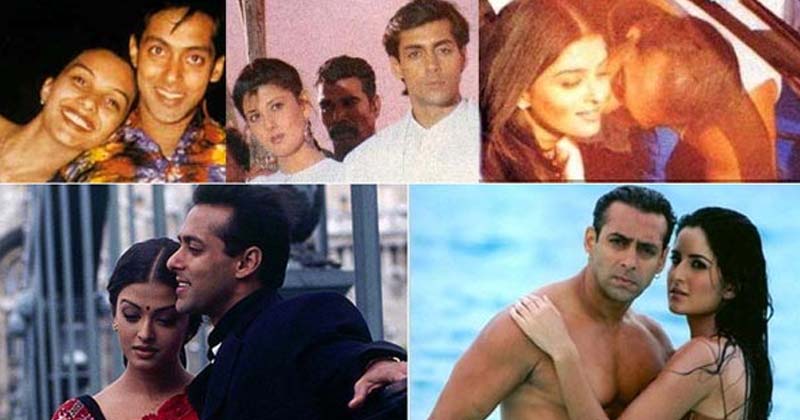 Salman Khan is yet to tie the knot, but his love life is full of different colours. He turns 52 today and the most eligible bachelor of India is still single. 52 is a oldly- mature number yet he can charm any woman he wants with his wittiness and sparkling persona. He is one to make headlines every now and then due to different controversial incidents. Although he had his fair share of relationships with many, but his love luck just did not work out with anyone of them.

Salman has always fluttered female beauties and gave his love fortune a whole lot of chances but, unfortunately, he is still in the market. Today on his birthday we want to take you down the memory lane and discuss his most popular love encounters.

Sangeeta Bijlani was the first official girlfriend of Salman Khan, but the couple broke up and Sangeeta got married to former Indian cricket captain Mohammed Azharuddin. After her divorce, Salman and Sangeeta are said to be good friends. What?? Still friends? So not fun!

Salman’s broken heart was later hitched to a former model-turned-actress Somy Ali. In 1999, they broke up on a rough note. Salman’s abusive behavior is said to be the reason of their break up but guess what! They became friends later. Same old story and poor Salman.

No One, not even Salman Khan himself can forget this relationship. They got hitched during the shooting of Hum Dil De Chuke Sanam and later they accepted the relationship in public. But again the aggression and possessiveness of Salman Khan became the enemy of their romance and the relationship did not survive. It was a depressive heartbreak for Salman.

As Salman was trying to get over and move on in life, he found Sneha Ullal. She was Aishwarya’s lookalike, well, her eyes were, but Salman never accepted this relationship in public. Guess he was just playing safe.

Salman’s broken heart did not lose the hope for love and went on to another relationship with Katrina Kaif. Although she was very much younger to him but love do not understand such materialistic differences right? Well, the couple never went public about the relationship but it was clear that they are in love. Salman’s hard luck gave him heartbreak and this relationship also sank. Maybe that was the right time to wonder ‘Maine Pyaar Kyun Kiya’.

After Salman broke up with Katrina, he introduced a new actress Zarine Khan and she resembled Katrina a lot. It means ‘Reebok nahi toh Reebook hi sahi’. Well, she was very close to Salman after his break up and the couple was believed to be dating but Salman refused to accept it. They too broke up and now they are just good friends. Dear Salman, why don’t you make them friends in the first place?

After the ‘Bajrangi Bhaijaan’ star broke up with Zarine Khan, there were so many names linked with Salman but those rumors never lasted for long. But if we believe rumors the handsome hunk found a new love in his life and he is dating Lulia Vantur. The Romanian model and TV presenter is said to be in a love relationship with Salman and rumors are that he is planning to get married to Lulia. Well, time will reveal the truth about Salman’s marriage but till then let’s just hope that his luck works fine or else we will have another movie on Salman’s life – ‘Saat Pyaar Maaf’! Just saying.

We all want to see him happy and on his 52nd Birthday, Team Rapid wishes him loads of happiness and success. Like millions of his fan, we also want to see his life blooming with love. Cheers!!