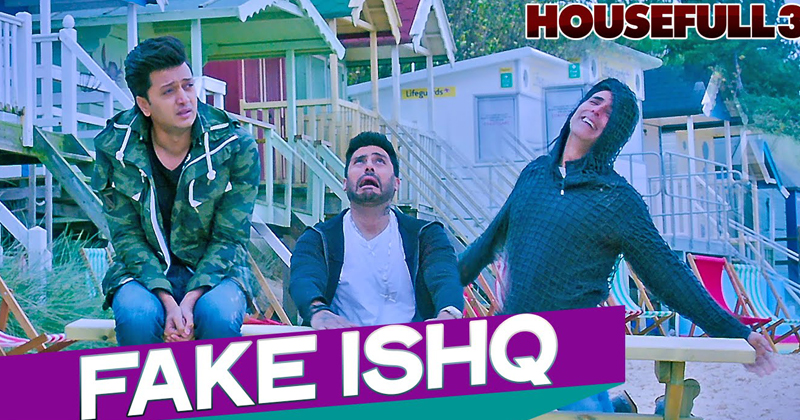 “Fake Ishq” is the newly released track from upcoming Bollywood comedy Housefull 3. The song is sort of an emotional qawwali track but rather than drenching your emotions this one will tickle your funny bone. All the songs of the movie have been extremely hilarious and “Fake Ishq” too will get your cheeks hurt with the funny quotient.

The song features Riteish Deshmukh, Abhishek Bachchan, Lisa Haydon, Jacqueline Fernandez, Nargis Fakhri and Akshay Kumar. In “Fake Ishq”  Riteish, Abhishek and Akshay are heartbroken and cursing their luck in love. All three of them are crying their eyes out yet they look extremely humorous. Now you must be thinking how can they be crying and still be able to make the audience laugh. Well, for that you have to watch it yourself.

Now you got it? The song is rendered in the voices of Kailash Kher, Nakaash Aziz and Altamash Faridi. The music of the song is composed by Tanishk Bagchi. The lyrics of the qawwali are penned by Arafat Mehmood and Farhad-Sajid. Housefull 3 is an upcoming romantic comedy directed and co-written by Sajid-Farhad. The film is slated to release on 3rd June 2016.