Home World Narendra Modi, Aishwarya Rai & Priyanka Chopra Are Some Of The ‘World’s... 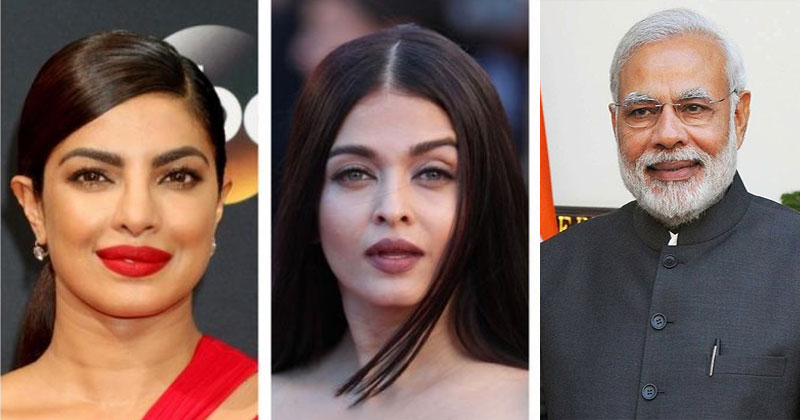 Admiration doesn’t come easily for anyone, while some take months, other’s have to work hard for years and years to make their name, and then there are some who owe their life’s success to one incident that changed their entire life for better, along with people around them.

However, how can one actually put a number on one’s admiration? Can it be the number of people who follow them on social media, but then not everyone is on social media? Or maybe it’s the number of good things one does, including charities and special care for people who need it. But maybe, the best way is to go out and talk to people about who do they admire. And that’s exactly what YouGov did.

YouGov has compiled their annual survey, in which they covered the views of people in 35 countries – the most ever – and interviewed more than 37,000 people.

The list of the survey is out now and we have more than one reason to celebrate its existence, exactly five to be precise. Everyone knew that PM Narendra Modi would have definitely been on this list considering how blindly and loving the people of this country, from all over the world, follow him. But the men’s list had one more Indian and it was none other than – Amitabh Bachchan, who follows closely behind PM Modi on 9th position.

There’s a separate list for women candidates who are some of the ‘World’s Most Admired People 2018’. And, that list includes three Indian women, all from the most glamourous field in the country – Bollywood. Aishwarya Rai stands at 11th position, while both Priyanka Chopra and Deepika Padukone followed close behind on the subsequent 12th and 13th position.

While this list was made on the global front, considering the world’s most admired people 2018, YouGov also split their data into local categories, allowing one to see which faces were most popular in their country. In India, Kiran Bedi topped the list for women’s category with 10.10 percent admiration score, followed by Lata Mangeshkar and PV Sindhu.

Whereas in men’s category, PM Modi was given the top spot, followed by MS Dhoni and Barack Obama.

So did your favourites make the cut?