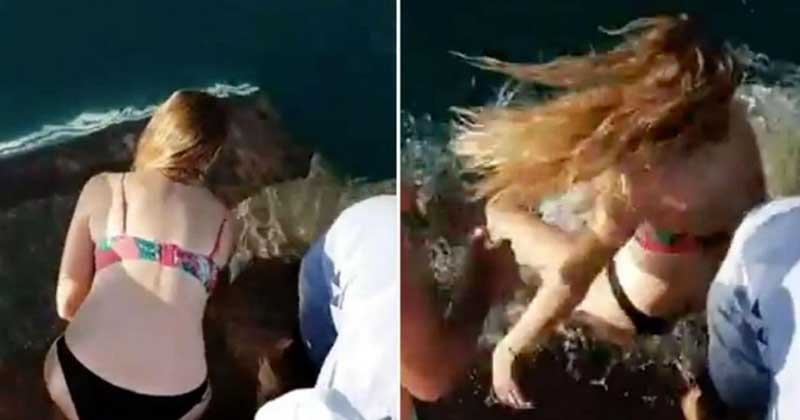 We humans have always been scared of the unknown which is why world’s highest mountains and deep seas are still undiscovered by us. However, things are changing now, there are some who are no longer scared of the unknown but rather crave for it. So many people on almost everyday basis leave their homes to embark on an adventurous journey and see the wildlife up close.

Somewhere in between all of this, there are some who can no longer stripe that line of control. This video might be one of the examples of those very situations.

Melissa Brunning, who was vacationing in Dugong Bay, Australia, was living one of the best times of her life when suddenly things took a south turn. She was trying to feed the sharks, while still being on the boat when she was abruptly dragged by the shark.

The entire incident was recorded on a video and to say the least, it’s horrifying and definitely not for the light-hearted. As seen in the video, Brunning was being friendly to the sharks and one of them immediately dragged her into the water. Thankfully, she was immediately rescued by the people around her and was saved without any major injuries.

As soon as the video got posted on the Internet, it piqued the interest of many and soon people started commenting about how sharks are some of the most dangerous creatures on the planet. Some even went on to say that these creatures should no longer be living up close with humans and while all of it might come out of a thoughtful mind, it’s wrong and Brunning thinks the same way.

She took to her social media that the entire thing was her fault, considering she should not be this close to a creature like a shark, in the first place. Here’s all she said regarding the incident.

I’m quite blown away at how this story has made it across the world! Please let me assure you all, this is NOT a shark…

An incident like this one is a solid proof that coming too close to dangerous creatures has its own set of repercussions and one should always be aware of them. So, the next time you’re on holiday, do keep in mind to refrain from such dangerous activities.