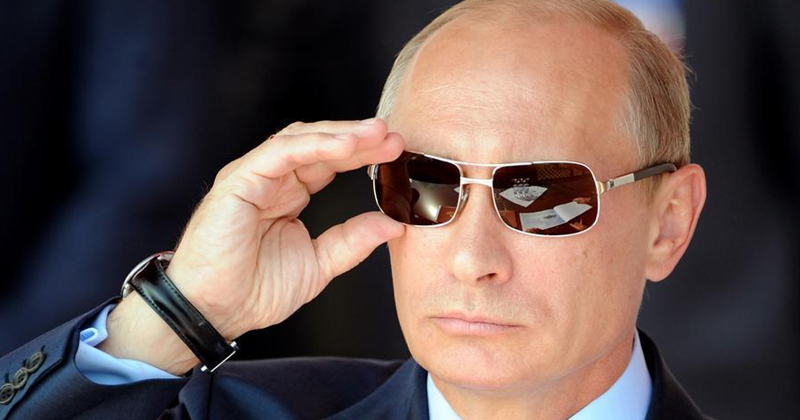 How ridiculous must be the idea to have a pet dog, tamed that it might be, strolling around freely, sniffing someone who is anything but canine loving? Surely, Ms Merkel wouldn’t have been happy. Some say he is to this day, a secret agent. Others submit vengeful theories about this highly perplexing man. But all said and done, Russian President Vladimir Putin is a bloke you don’t mess around with. Ever. Right?

Unless, of course, you are an American attuned to the cold war theory. For a country that has found it oddly challenging to take care of its own geographical spread, leading to a breakdown of what was formerly the USSR, Putin sits atop what might be called the Russian Game of Thrones.

The occupant of the highest seat in Russian polity is a man who is largely identified by his detractors in the West- most notably, in the United States – as a power-hungry weirdo who commands a leading world economy with an iron fist.

But as critics remain drenched in anti-Putin venom, we present 7 astonishing facts that reaffirm the belief that not only is he funnily weird, but also a powerful man

A Chiller with Snow Dogs

The Russian winter! Let’s not even get there. Napoleon tried and lost centuries ago. Then came the turn of the tyrants from the Third Reich: the Nazis. They were found buried, under heaps of snow.

Anyone’s who has planned to invade Russia has found a lot of snow to deal with. Thankfully, Putin hasn’t had to deal with it.

Apparently, one of the most loved pastimes of Vladmir Putin is to hang around with his snowdogs, some of whom are kept at a holiday location miles from Moscow’s political clout. It is also a well-documented fact that Putin admirably smiles at animals who don’t seem to like him.

This isn’t just a sport. It’s a hefty lung-exercising workout. Ice Hockey is admired by all, but played by a chosen few professionals, commonly from USA, Canada, New Zealand and elsewhere. But believe it or not, it happens to be one of the sports that Putin’s good at.

Back in May, 2014, upon receiving an invite from a local Russian team, Putin actually showed up and participated in a full-fledged Ice Hockey game. In fact, Putin loves putting on the helmet and playing with an agile hockey stick.

Singing out the English language

Life as a Russian ruling elite can be tough. When not engaged in meetings, then preoccupancy with several state run programs and international travel plans can wore out an individual.

Not Putin though, who makes time for regular English lessons during the weekends and where, apparently, his teacher instructs the pupil to sing difficult words and regular English songs, if incase learning the language conventionally poses difficulties.

At the outset, Putin definitely cuts a figure of an iron-fisted, straight-talking toughie. But on the inside, there’s loneliness, as it turns out to be.

Having lost both his parents and having been separated with his wife, who was herself suffering from nervous breakdowns, Putin’s had to face a lot of emotional upheavals.

One reckons, strong commitment to sporting pursuits and travelling might have stemmed from this fact of life.

When former martial arts superstar and evergreen action hero Van Damme decided to shoot Universal Soldier: Regeneration in the cool Russian interiors, he knew who to turn to.

Soon, the Belgian actor and Russian President had a series of meetings, something the duo have also had in the past.

You guessed it right. Both Putin and Van Damme have more in common than their European heritage and in fact, Putin, although not at Van Damme’s level, is quite a handy opponent of the self-defense technique himself.

Wherever Putin goes, Russia or Russian-instincts or culture follows

You may find this to be a slightly over scrupulous one. But that’s how it is, anyway. The Russian President, is apparently so particular about having his own paraphernalia of Russian specialists and care givers- whether it’s about culinary matters or service providers that a separate convoy follows Putin wherever he travels.

It has been written about extensively that not only are the existing hotel sheets and other articles of personal hygiene replaced wherever Putin stops for a rest but is in fact served properly by a coup of Russian cooks, waiters and, chefs handpicked to serve the leading political luminary.